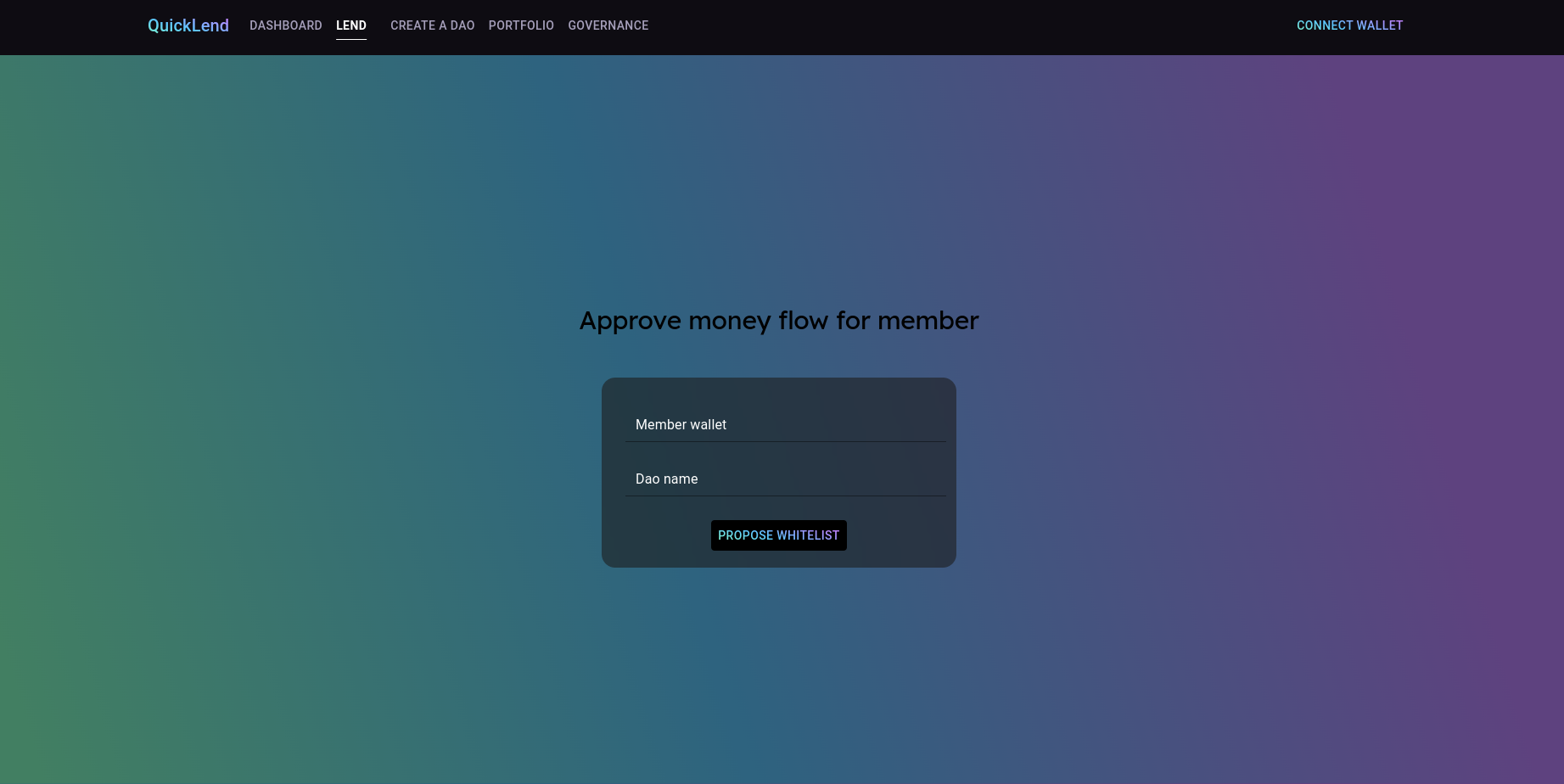 At the current state of DeFi, users experience low capital efficiency since most loans are over collateralized. We see that’s a huge burden both for users and as well as DeFi ecosystem itself. In order to develop a functioning decentralized financial system, we started to explore what are the other options for credit lending inside DAOs. QuickLend's mission is to harness the power of a DAO by fully utilizing its resources on behalf of its members: Large treasury holdings, Established member social network, Provide credit for the unbanked, The next step is to include credit offered on the back of on-chain credit scoring. QuickLend’s Lending System: Contributors of the DAO who hold governance tokens fund the Superfluid app Members can propose votes to move funds to another member Our first step is to establish a ROSCA (Rotating Savings and Credit Association (https://en.wikipedia.org/wiki/Tanda_(informal_loan_club) where a contributor in need can access the funds in case of emergency while backed by other contributors of the DAO they’re associated with. ROSCA (or Tanda, as known in Mexico) is a fully proven model that has been used by 31% of the population. It is a widely used model in traditional social networks which QuickLend has adapted to DAOs -- as DAO members start to 'trust' each other given their pursuit of a common goal and their frequent interaction on DAO-related social networks. *Tandas are formed for many reasons, often because at least one member is in need of money to pay a debt right away, or an emergency arises. *They provide a way to "borrow" and "save" when some members don't have access to other means of banking. *Tandas are based on mutual trust and the basic tanda has no interest. How we apply the Tanda system to QuickLend: For an example where 4 members decide to create a monthly Tanda; A list of Tanda receivers is decided (e.g. 1 2 3 4) In the first month, member ‘1’ receives the deposits of members 2, 3, and 4, In the second month, member ‘2’ receives the deposits of members 1, 3, and 4 (hence member ‘1’ starts paying the credit) … and so forth for the remaining 2 months. The above can be extended to any number of members and different periods (e.g. 10 members on a weekly Tanda). The members of the DAO need to vote on the order of payment (When no interest is paid, being the first is better): Need-based (e.g. member with the immediate need gets priority and other members agree - all discussed in the DAO social channel) Lottery (the member number is assigned randomly) As an example, a Tanda is formed between 10 friends and family. There are 2 options: Each individual gives $100 USD every two weeks to the DAO. At the end of the month, one participant gets the "pot", $2000. Each individual gives $100 weekly, and each week one of the ten participants gets the pot ($1,000). This continues until each member has received the pot. 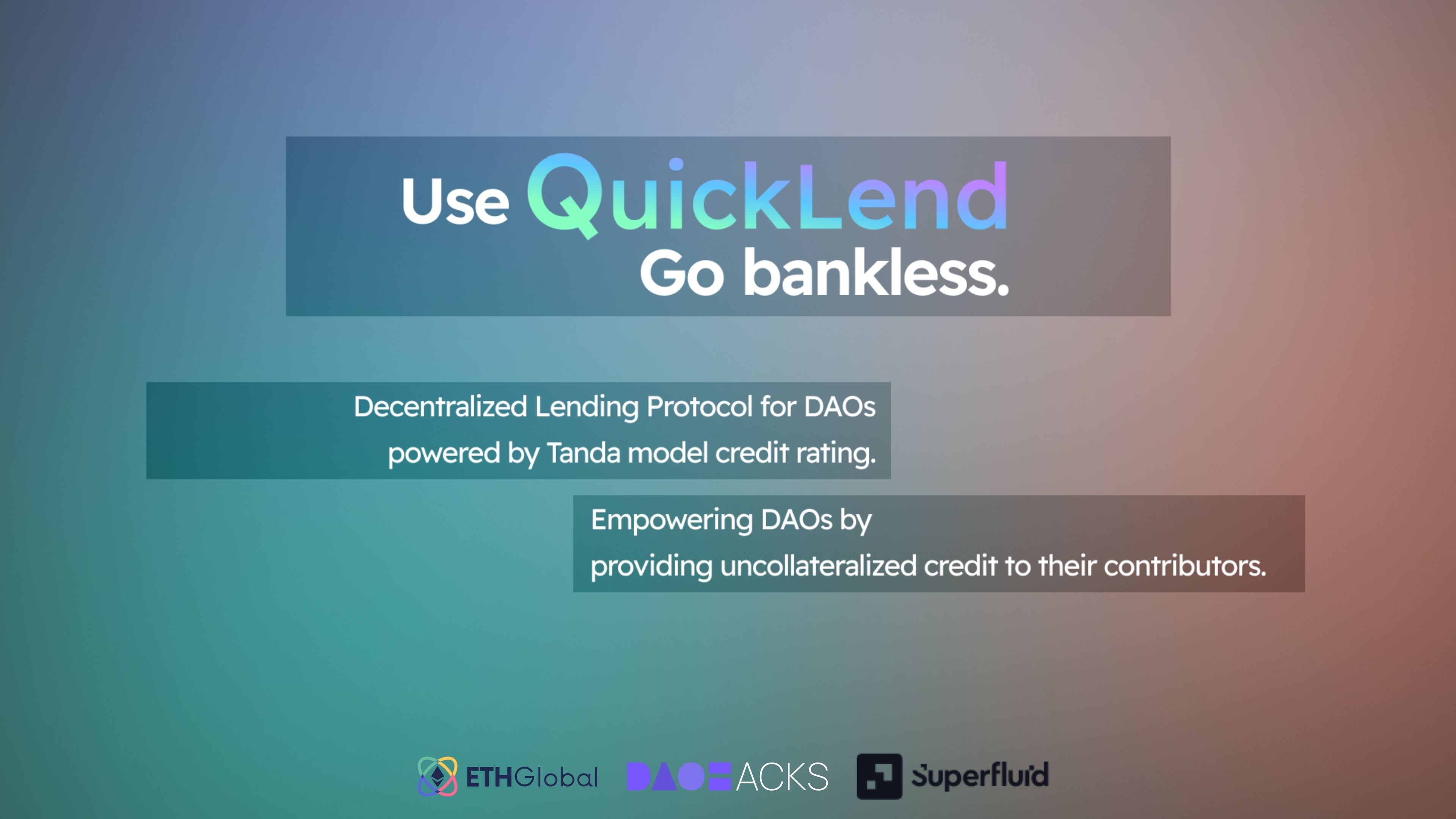 We used Solidity to build the smart contracts as well as the Superfluid smart contracts in order to create a SuperApp and MoneyStreaming. For the DAO interface, we utilized several libraries from Aragon (Aragon DAO smart contract templates). The full deployment and tests were done with Hardhat and Typescript, while for the money stream app test we used Superfluid SDK. Our application was built with React, our designers used Figma to create the interfaces. Several libraries from Aragon (aragon.js) were included to be able to interact with the DAO and create votes and transactions on behalf of the DAO.