Helping Web3 creators learn more about their collectors with easy to use dashboards and analytics.

Creators don’t know much about who their collectors on chain. That’s like a famous artist not knowing who appreciates their art. In a world where data is king, we’ve barely scratched the surface of what’s possible when making sense of blockchain transactions. Questions like: - How many of my collectors hold ape tokens? - How many of them recently purchased Moonbirds? - Are they into music NFTs? - How many of them are in FWB? - What is the average age of my collector’s wallet? …can be crucial to growing a web3 community. Creatorinsight is a platform built for web3-native creators to better understand who their collectors are on-chain. By quickly searching a smart contract address, you can unlock valuable insights about your audience using our user-friendly analytics and simple data visualizations. Our no-code dashboards answer pressing questions that help you create smarter experiences for building an everlasting community. 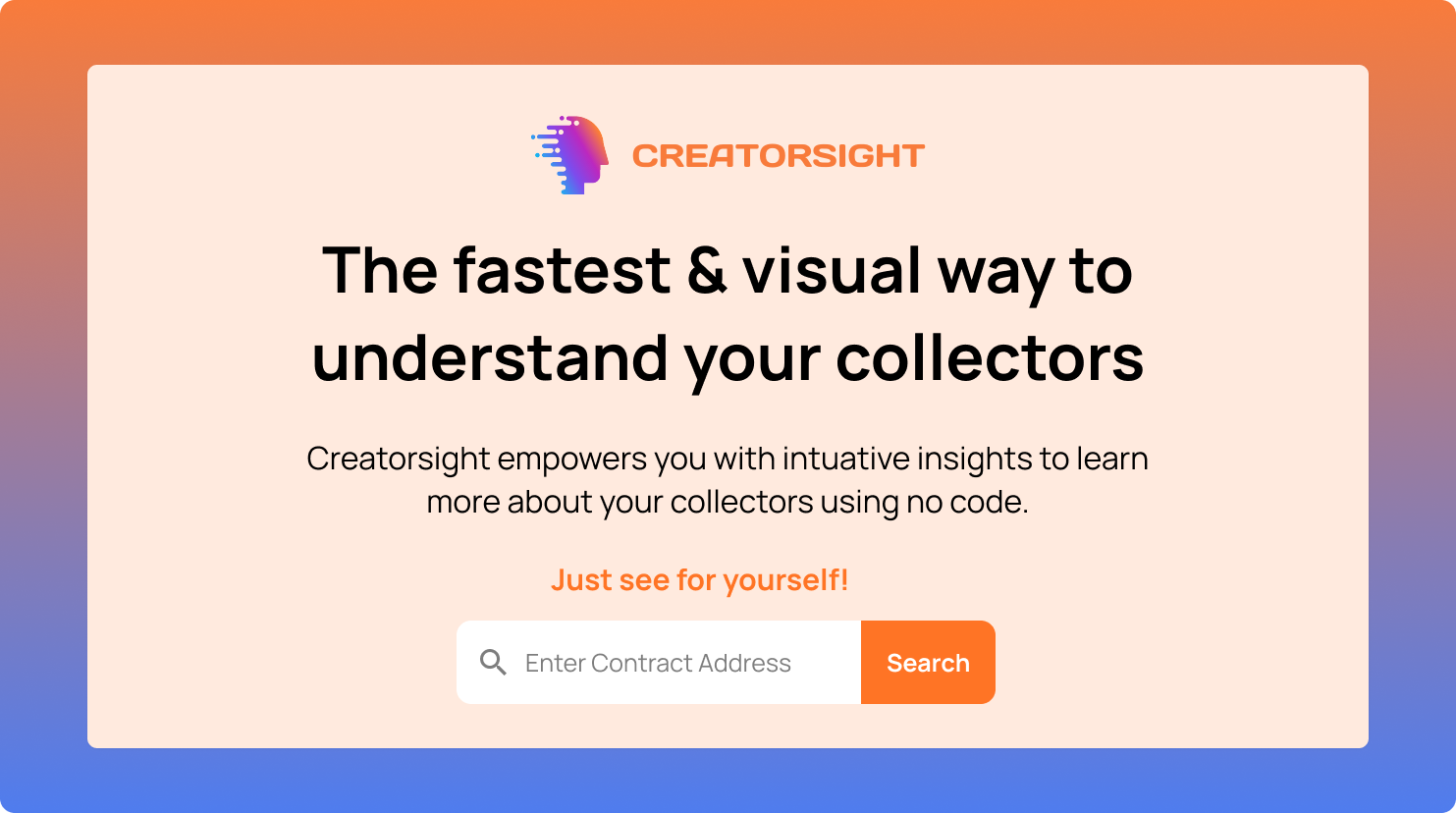 It all began on one magical day when 2 developers from different corners of the world both had the munches and decided to go for falafel. Attire was complimented, and what started out as a conversation about music NFTs, quickly progressed into discussions about an existing hackathon project idea aimed to build tools to provide creators with insights about their collectors. It was bemused that all this data existed in public view and should be somewhat simple to corrilate in one place and derive many insights for you would hardly want to charge for such a usefull tool why not make it for free. So an ecllectic rag-tag team was formed from old bonds and new friends. Luckily for them a hackathon happened to start the next day. So off they set to conquer the world together and eat chilli peppers. As we brainstormed all the ways in which "The Graph" could provide every answers we needed, no one else had build exactly the subgraph we needed and it eventually became apperent that auto-generating subgraphs on demand was too time intensive. :( Dark mode was debated but Orange was the color theme chosen in honor of a king. Next we explored quiries to OpenSea and found that the API keys required would take 5 business days (thumbs down). Similar story with bloxy unfortunately. After that we considered building our own archive node so we could really query to our hearts content but again were foiled by limited resources, though imaginations ran wild with the possibilites we had to put them on hold for the sake of submitting by sunday. Infura & Etherscan became our fallback favorites. Limititations of the ways we could request data from free accounts, creative and clever tricks were requried. API rate-limit restrictions became a painpoint and motivated members to imliment a magical cashe system. Many databases were debated vigorusly and decided upon defiantly only to be discard once imlimentations were attempted. In the end we wrote a cache system backed by text files on disk, but with interfaces to easily plugin different options in the near future. By far the hackiest hack the happy hodlers had, it succeeded in halving the load times easily. While excitement still ran high, caffine ran low and our hacker band were able to agree on the best node packages without any injuries and beautiful dashboards and widgets were born, popular porjects were tested and interesting information was learned.