MyEthWorld is a 🔥 Super Dapp 🔥, a suite of different services that utilize the blockchain. This platform aims to centralize decentralized apps into single source of truth to make the blockchain more accessible to any audience. 💖 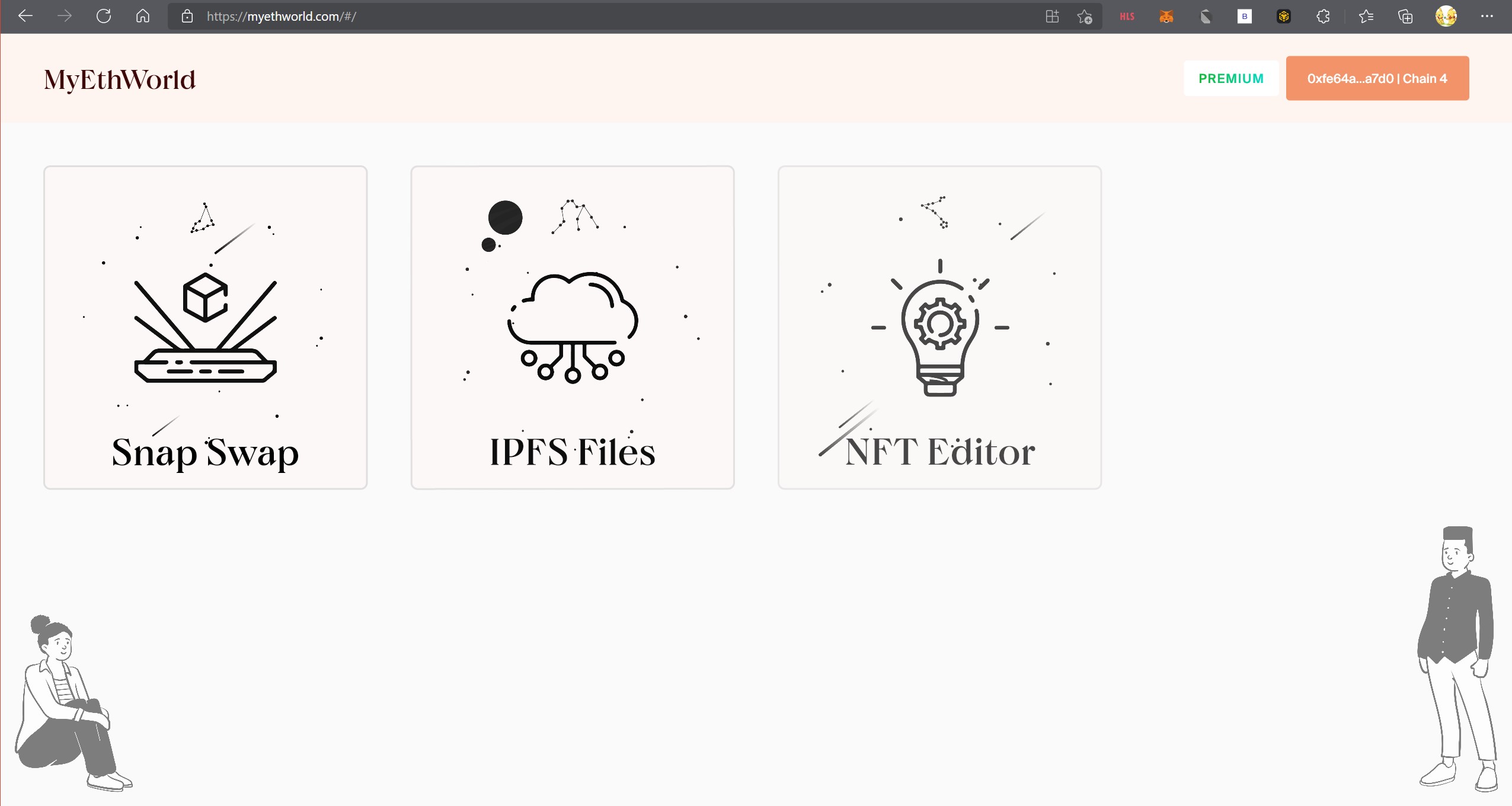 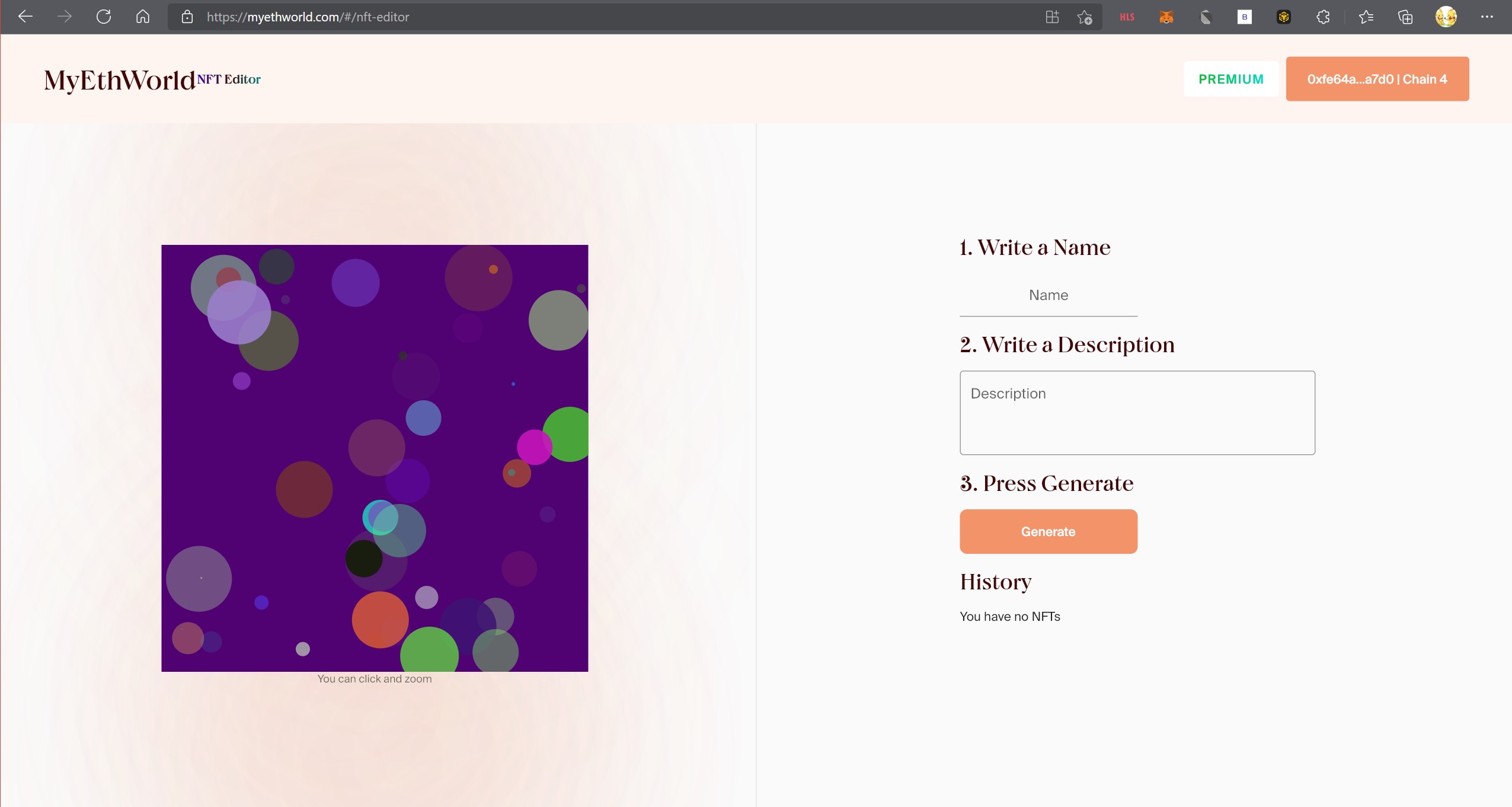 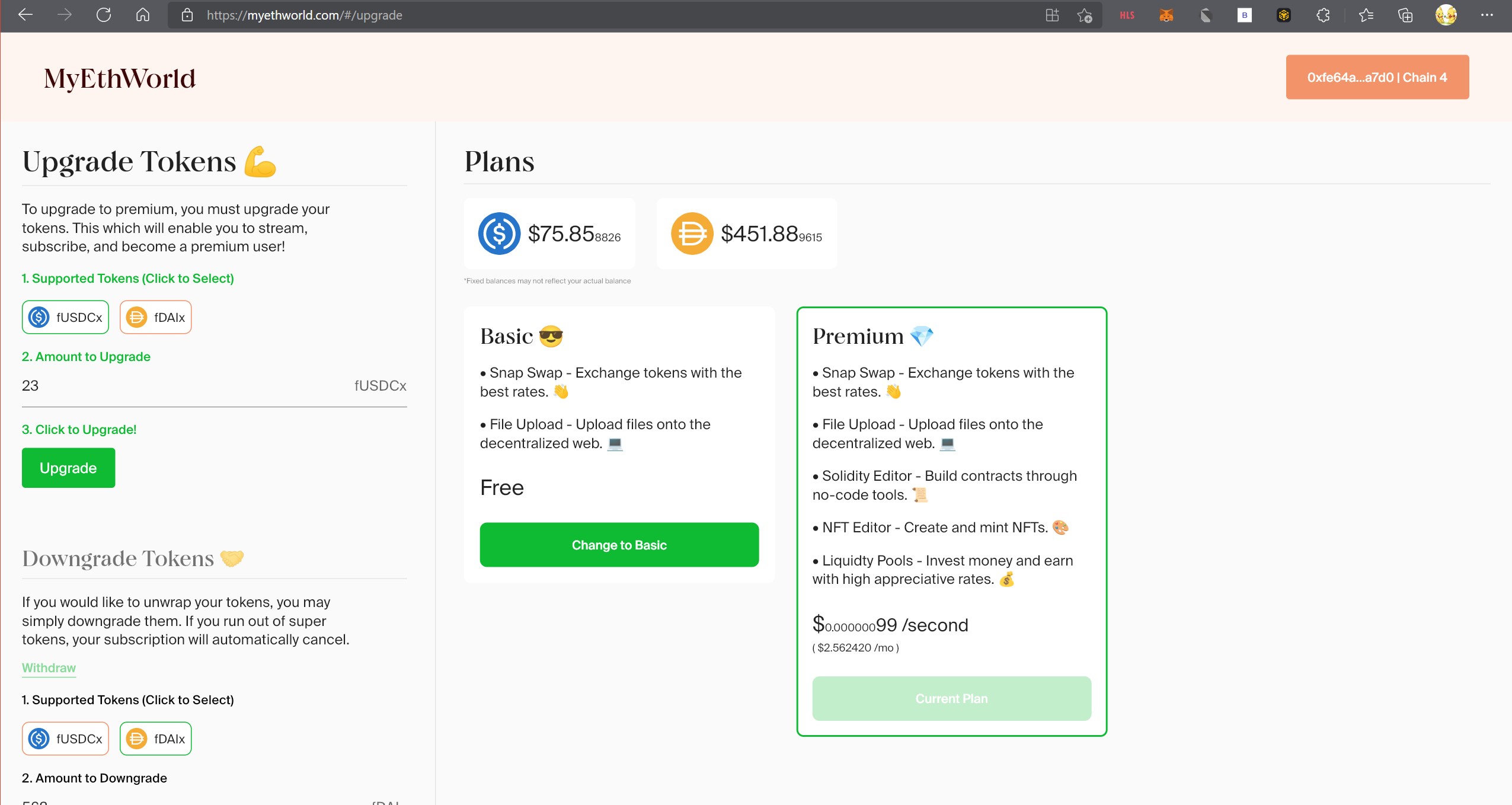 Want to see an in depth demo? https://youtu.be/zl0JL7WMMVs . This demo will include more details on the process of streaming crypto for the subscription using Superfluid. MyEthWorld is a super dapp that supports many different services including a DEX, decentralized file uploading, NFT Editor, and much more! Similar to the goal of the hackathon, we wanted to make an app where users would be exposed to the blockchain through an accessible platform. The blockchain, although revolutionary and innovative is still in its infant stages. An average person would be confused by blockchain technology if they were introduced to it without any guidance. MyEthWorld aims to solve this problem by introducing blockchain technology through several different avenues so that users can experience blockchain in a live setting with the help of many different services. Our blockchain platform was developed with an aim to revolutionizing the way we think about cryptocurrency trading with several blockchain-based services under one roof unlike any other blockchain app out in the market today. Many dapps in the market are single services. Therefore, many users will have to scramble to find what's good. MyEthWorld is different. MyEthWorld provides blockchain services through decentralized apps in an attempt to create a one-stop blockchain playground for users to feel the blockchain without any obstacles. With blockchain breaking into mainstream society, it is important that people become familiar with blockchain technology and its capabilities. MyEthWorld strives to be the world leading blockchain app that introduces blockchain through several avenues so that anyone can experience blockchain in this fast-paced technological age. The dapp currently supports a DEX, IPFS File Uploading, and an NFT Editor that is blocked by a subscription paywall. This paywall is cheap, in crypto, and paid by the second! So don't be afraid of subscribing for a day (it's 8 cents). Want to share the project? Here's a short link http://hack.myethworld.com 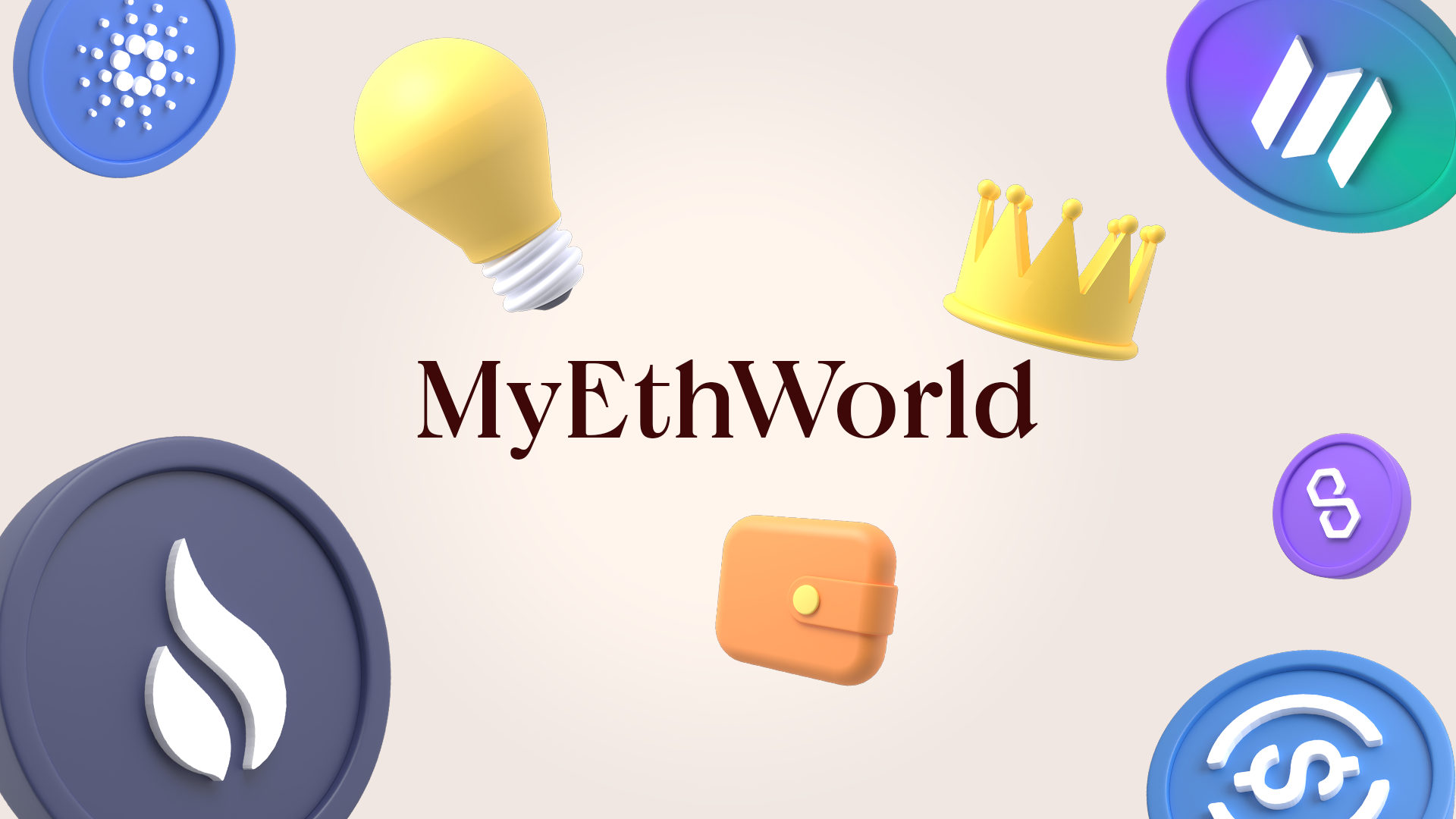 This project was made with Flutter, a frontend framework made by Google. The project was made using a feature based architecture utilizing Blocs and Cubits as our state management of choice. Using Flutter with extremely difficult. Flutter codes in Dart, so the interoperability capabilities between using the JavaScript frameworks and Flutter was tedious. Flutter is also relatively young, so the documentation, if any, describing interoperability was either outdated or minimal. It was fun using Flutter my framework, through its many challenges I found a way to integrate the features I wanted. For sponsors, I integrated Superfluid for a subscription paywall, Moralis for authentication and storage, 1inch for trading capabilities, The Graph for retrieving data for the subscription paywall, NFT Port for minting nfts, IPFS for file uploading, and finally Polygon the network of choice. Used Superfluid's streaming feature to allow the user to subscribe using either DAI or USDC to pay by the second for their subscription. Additionally, I implemented features to help with upgrading and downgrading tokens to DAIx or USDCx through a simple and minimal interface. Used Moralis for authentication and storage. Moralis became extremely helpful when I needed to get the balances of a user or upload files to IPFS. Very minimal and simple framework, loved the community as well. Used 1inch to create the DEX within MyEthWorld. This was the most complicated feature of the whole project but I learned a lot when making it. Used Graph's subgraphs to retrieve data from Superfluid. This data would allow me to figure out whether the user was subscribed or not, no matter the token. Very helpful feature and it was extremely useful. Used NFT Port to mint NFTs for the NFT Editor. NFT Port was actually really easy and intuitive, it's just a REST Api. I love the simplicity and hope to see more rest based APIS for blockchain services. The NFT editor was the quickest to make feature, just because of this sponsor. Lastly, Polygon was the network of choice. I'm quite new to the blockchain, but one thing that disgusts me was these freaking gas prices. There is no world where I'm going to pay $50 to invest a small lump sum of money (I'm a student). Polygon, to me, is very accessible, and likewise to the theme of this project, accessibility is the number one goal.