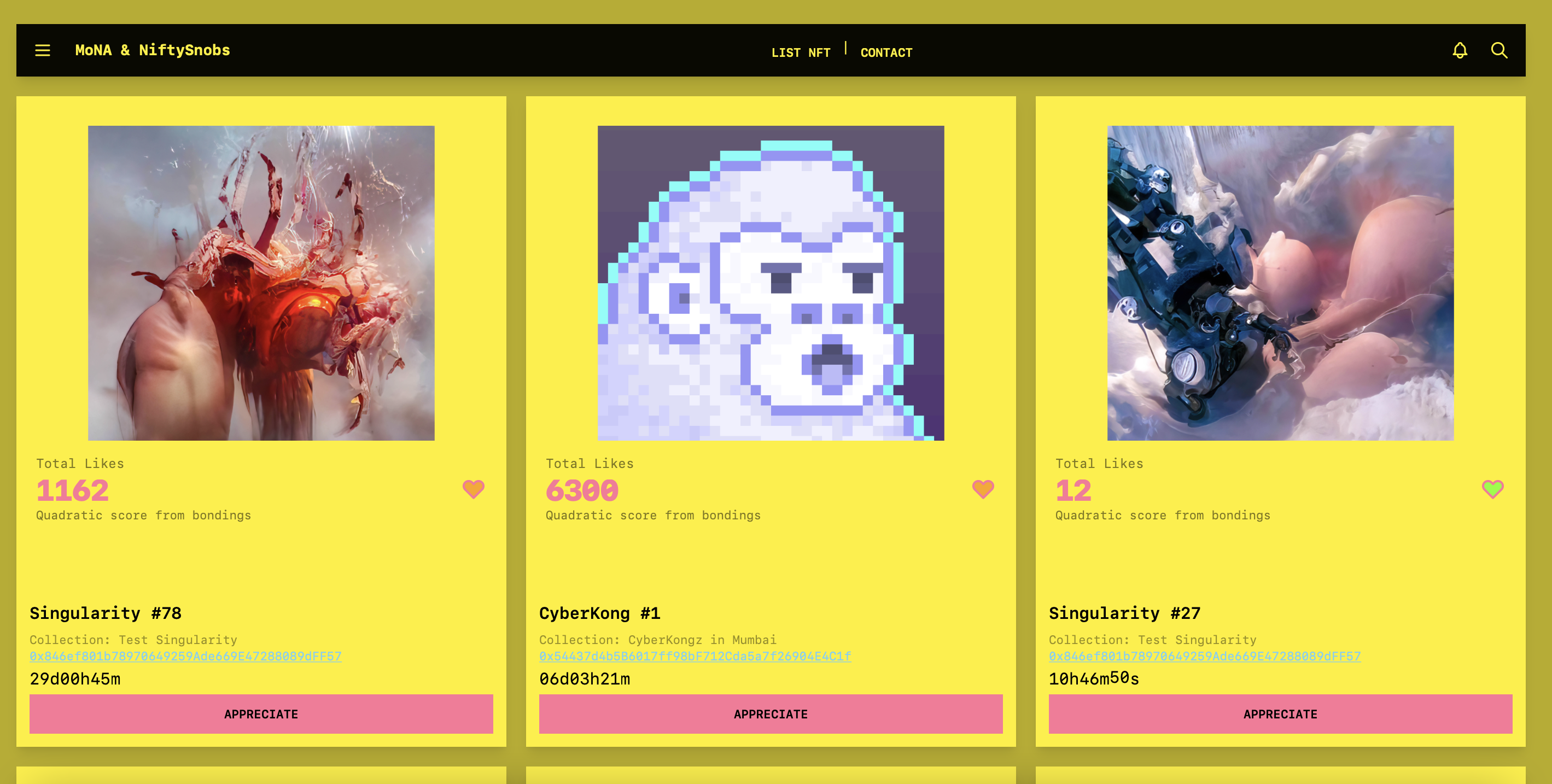 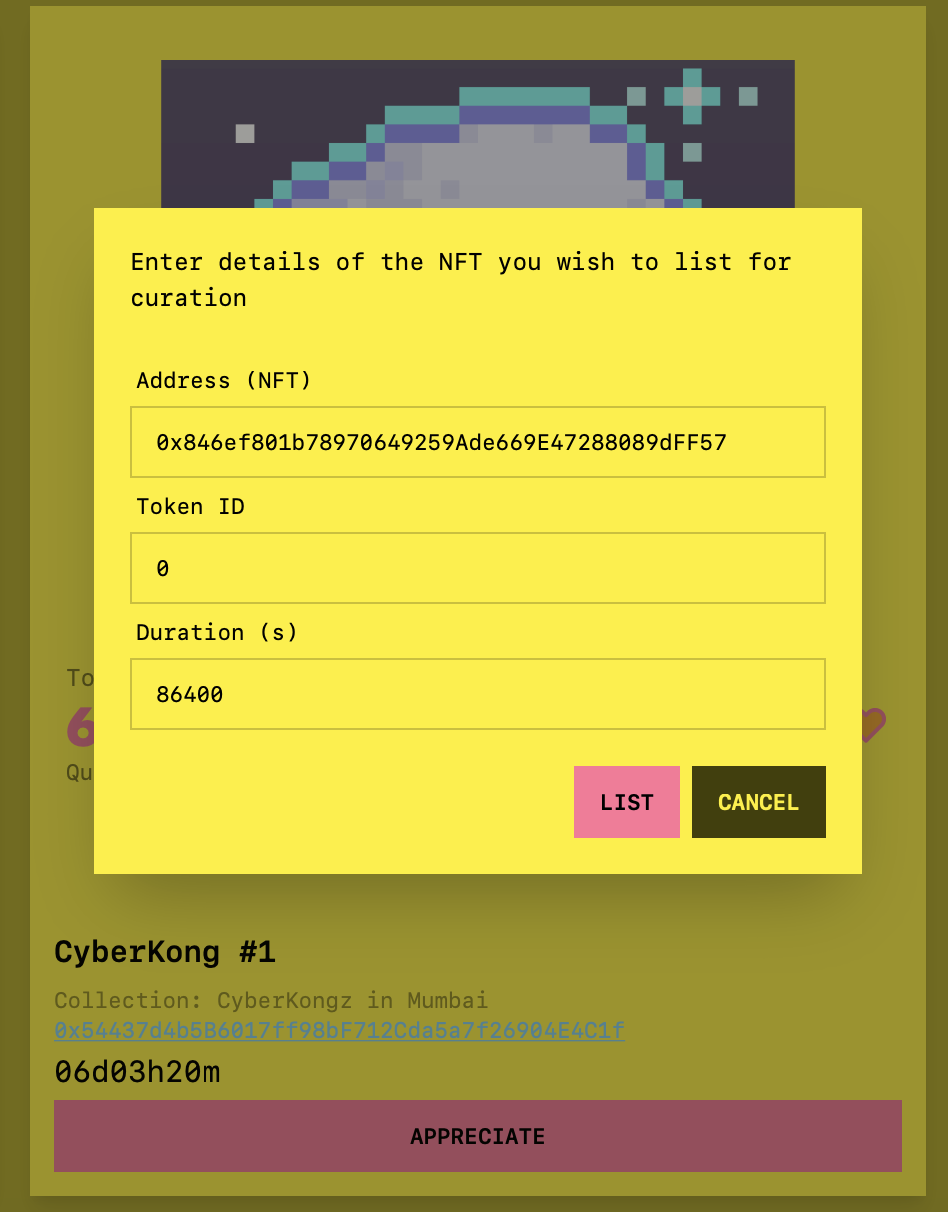 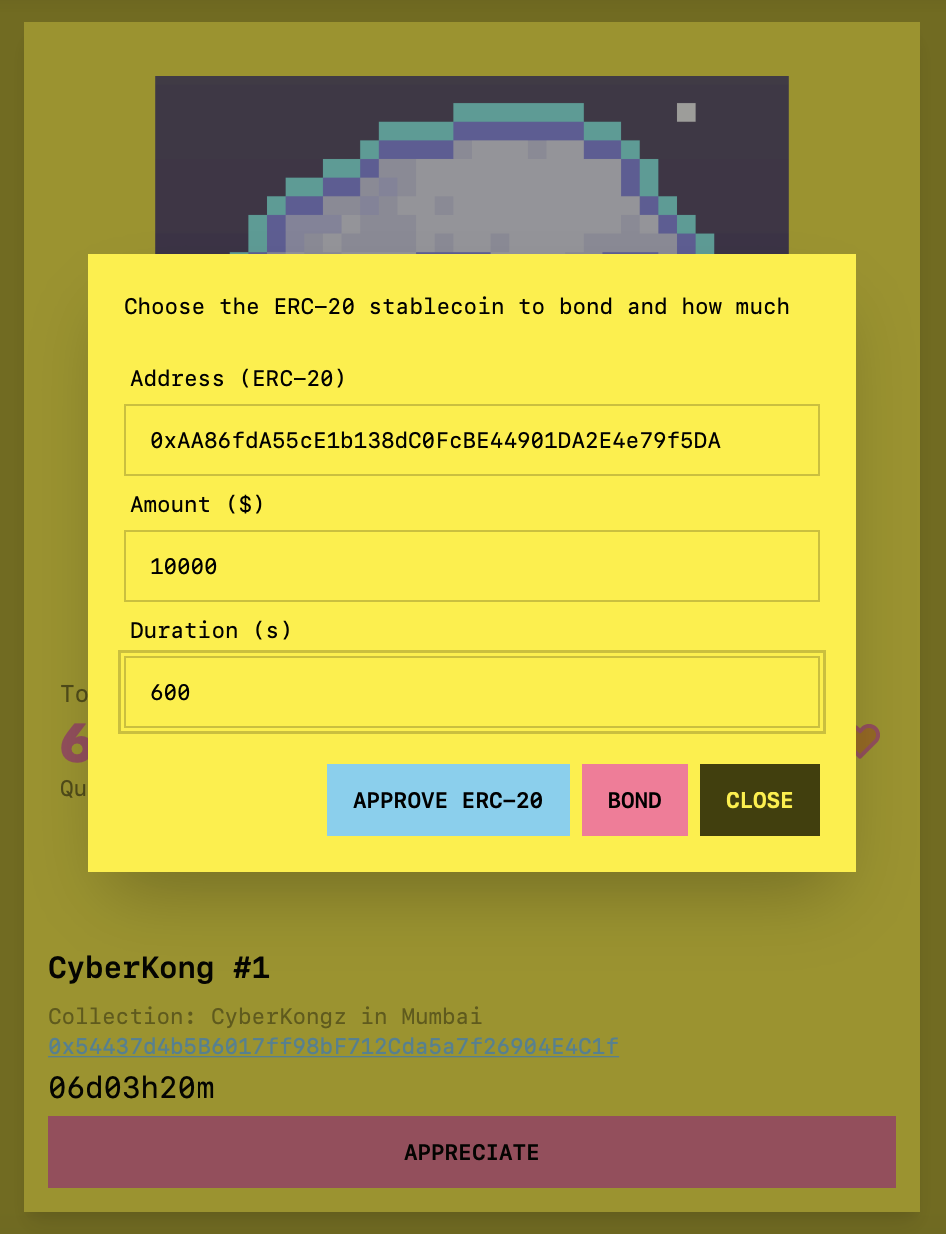 This project is v0 of the MoNA & NiftySnobs project, looking to bring cryptoeconomic/defi/game theory to the world of judging and interactions wtih NFT. The roadmap consists of multiple milestones. The first milestones I have been able to cover here is the ability for NFT owners to list their NFTs on the platform, to be llisted in our UI & subsequently for any viewers to show appreciation to said NFTs by locking their dormant ERC-20 USD stablecoins for a specified duration. A quadratic scoring mechanism is applied based on the amount bonded, to empower the crowd, instead of whales. This is simply the first part, to provide a simplified and understandable mechanism to onboard users. The core goal set out to be achieved on this milestone is providing an equitable NFT quality discovery mechanism. Rather than judging an NFT's worth by wash trading or money laundering, the opportunity here is to see what people REALLY like and are willing to throw their money behind. The following milestones include allowing NFT owners to list their NFTs for fractional ownership to those that appreciate it on the platform. We know backroom deals happen, we make it transparent, but don't look at it in this case as a backroom deal, instead it's just like VC investing in projects, where multiple stakeholders can multiply its potential success. NiftySnobs is a further evaluation of the project, where CryptoPunk-esque NFTs are created, serving as meta-accounts, which track the NFTs liked and appreciated and serves almost as a Resume on the platform for the different classes of users there will be, which will at least consist of artist/collector/curator. The Snobs are meant to act as a sybil resistance mechanism for a user to not split funds across accounts to game the quadratic scoring, but instead to partake with this NFT which has incentives to level it up. 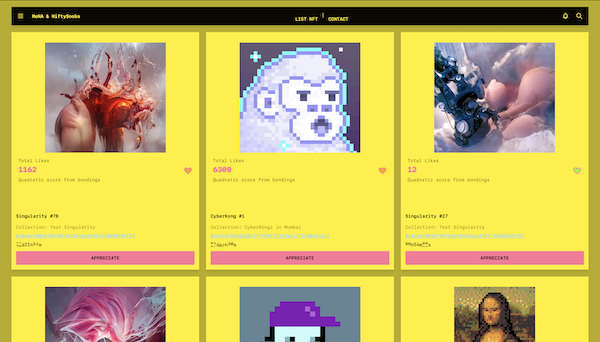 The contracts are written in Solidity. Hardhat was used to bootstrap the project and back up the conceptual design of the written contract working, with tests. The demo contract has been deployed on the Mumbai Polygon Testnet. The Singularity and CyberKongz NFTs have also been cloned by me on Mumbai, to act as demo NFTs that are usable with the DApp. I've written DApps since 2016 and have used solidity since 0.2. Developing and deploying with hardhat was a dream... it was my first time using it based on recommendations. Being over a year out of the space, it has been nice to see the tooling see such an improvement. I also was a miner on Ropsten and even validator for Rinkeby, and the staging experience on Mumbai was a joy. Fast, cheap, just works, and easy faucets available. I had the luxury of not depending on faucets for the other 2, but with Goerli it was a nightmare and in general a nightmare if I didn't have on-hand access to my miner accounts. The frontend was hacked together by me in a couple days with a few all-nighers. Huge credit to Svelte for making the front-end dev a joy, for me who is technically a full-stack dev, but generally much more prefers working on the backend. TailwindCSS + DaisyUI really eased what is usually the most difficult part for me, which is messing and fine-tuning CSS for a pixel perfect look. Thanks to them, I didn't have to let my OCD get the better of me.