I set about visualizing the ipfs/filecoin network underlying a Textile Powergate node. Visualizations here can be used to get a better idea of the scale of the network. They’re made to be easy to export and use and can be replicated in any interactive python notebook type environment. You should be able to rerun the notebook yourself with no setup. Or recreate this project in a jupyter or google collab notebook. Also images should be in the source repo of the vizualizations. ---- Sadly, i suffered a serious accident on Jul 12th, and never got around to implementing anything more than the initial POC map of the network, had lip surgery related to it (aug 5) so it's a long process. Notes on the video: * Might have to download and play as gdrive isn't very reliable at playing it. * Textile powergate save is at the end 2:59-3 * skip to 00:20 for code * updated to 4k 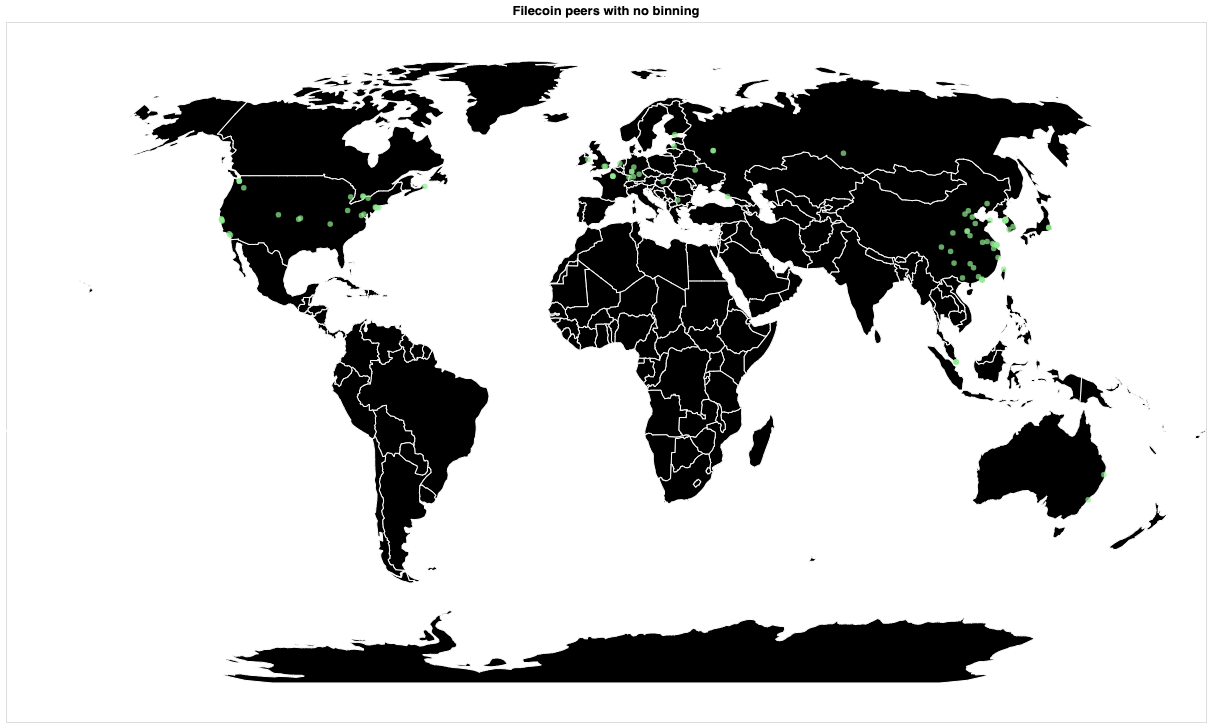 Tech Python & Javascript NodeJS app uses hosted textile powergate to fetch peering information. This info is then written, as json, to github, and ipfs via pinata and powergate. In a python notebook environment the data is then ETL’d in and visualizations are created. The visualizations use a python library called Altair. Basic data collection flow: * A NodeJS CLI application is run on a loop * This talks to the local or remote powergate client via the textile/powergate-client JS adapter * It calls the peers API on powergate and writes that to a file in JSON * This data is then stored for the visualizations. I just used github to store it in an easily accessible manner while prototyping. * In the databricks notebook linked there’s some python code that then ETL’s the data from Github or any remote source * Finally Altair is used to generate the visualizations from the cleaned and merged data-frames * We generate a map projection using a base vega dataset then plot the peers on it based on latitude and longitude * The data is also aggregated via country * Since Altair generates a vega spec, they can be interactive and can be transformed into HTML5, or pictures There’s 4 visualizations that I managed to complete: * An equirectangular map with the distribution of nodes based on latitude and longitude, with the nodes aggregated or binned based on their country * The above but without the data aggregation * Pie chart of countries - uses the visualizer native to databricks * An orthographically projected map (a globe) with a projection of the nodes Notes: * Since these projections were based on queries to only a few different nodes they may not be a full map of the network, only the peers this node connected to during the experiment * I tried using pygate but I couldn’t get it to work at the time * Choice on databricks: * We use it at work * Think of it as a interactive python notebook * The code in it should work in any interactive python notebook type environment like google collab or jupyter * Used Textile Powergate. Used localnet, then connected to the main-net from my machine and eventually also used the hosted Powergate instance provided by Textile. * Used both the CLI interface and the JS client thus the messy etl code Some things I wanted to do but didn’t get a chance to: * Visualizing * Deals on the network * Network peers over time - some peers may stay on the network while many just are transient * The network via other gateways to compare * Ethereum users top board <- need data source * 3Box users <- Need 3Box api * Comparing reliability and speed of the different providers, direct writes seem to fail or take a long time * Uploading the dataset on a IPFS hosting solution * Hosting the visualizations as a website on a decentralized store