A bank’s sole purpose is to create credit where there was none before. The creation of credit underpins all sectors of the economy; credit is the protocol on top of which all economic activity exists. Modern banking is broken, and thus the global economy is broken. We propose a new banking system. We propose a future without the inefficiencies of short-term and long-term debt cycles, inefficiencies whose upswings have been captured by the corporate political class and whose downswings have been amortized across the taxpayer, the People. We propose Maximus, the first on-chain, decentralized bank (OCDB) to be fully controlled by the People. Maximus follows in the footsteps of its predecessor, MakerDAO, the first OCDB. Once a majority of banking is conducted through OCDBs, the world will be rid of volatile short-term and long-term debt cycles. OCDBs mitigate debt cycles by returning logic to banking. OCDBs end both the uniform pricing of private banknotes and the People’s insurance of private banks. It makes no sense that credit created by distinct banks, with completely distinct balance sheets, is priced evenly. It makes no sense for banks’ equity holders to benefit in good times, but to be bailed out in bad times. OCDBs end these illogical practices, restoring free-markets to banking. OCDBs allow the free-market to constantly weigh an OCDB’s leverage through the free-market pricing of the OCDB’s banknote. OCDBs place the risk of insolvency on the bank equity holders themselves. Because of the transparent nature of blockchains--OCDB’s balance sheets and collateralization requirements are fully transparent--the free market risk can properly assess the risk of every OCDB. Because of these properties, we believe that every bank that pretends to be privately run today will eventually become an OCDB. The real-time, fair-value assessment of credit risk, combined with the inability for the People to bail out banks, ends volatile debt cycles. The free-market tells banks when they are over-levered, and banks have no perverse incentive to continue to lever when they find out they are over-levered. Without debt cycles, GDP growth and asset price growth will follow productivity growth. Without debt cycles, generations will never be born with extreme economic disadvantages to other generations, simply because of where that generation fell in the debt cycle. Debt cycles are not only inefficient. Debt cycles are a cross-generational moral hazard. MakerDAO, the first OCDB, has failed the People. MakerDAO’s stakeholders are no different than the stakeholders of the modern banking system, a group of like-minded individuals perched on the same road; the only difference is the road’s name. We seek to create a bank controlled by the People it serves, not by the wealthy who deny the People a seat at the table until the price of the seat is high enough for them to sell theirs. Thus, Maximus is owned by its users, its equity distributed to those who provide the three most valuable services of any bank: 35% is allocated to those who take loans from the bank, increasing the bank’s credit creation; 35% is allocated to those who provision liquidity between Maximus’s banknote and Ether in an automated market maker, increasing the utility for the bank’s credit; 30% will be controlled by the MaximusDAO, ensuring continued building and improvements to Maximus. A system for the People does not exploit those who have no stake in the system; Maximus will never freeride the taxpayer. A system for the People avoids the control of the select few; Maximus’s doors are open to all. In this vein, we present Maximus, a bank by the People, of the People, and for the People. 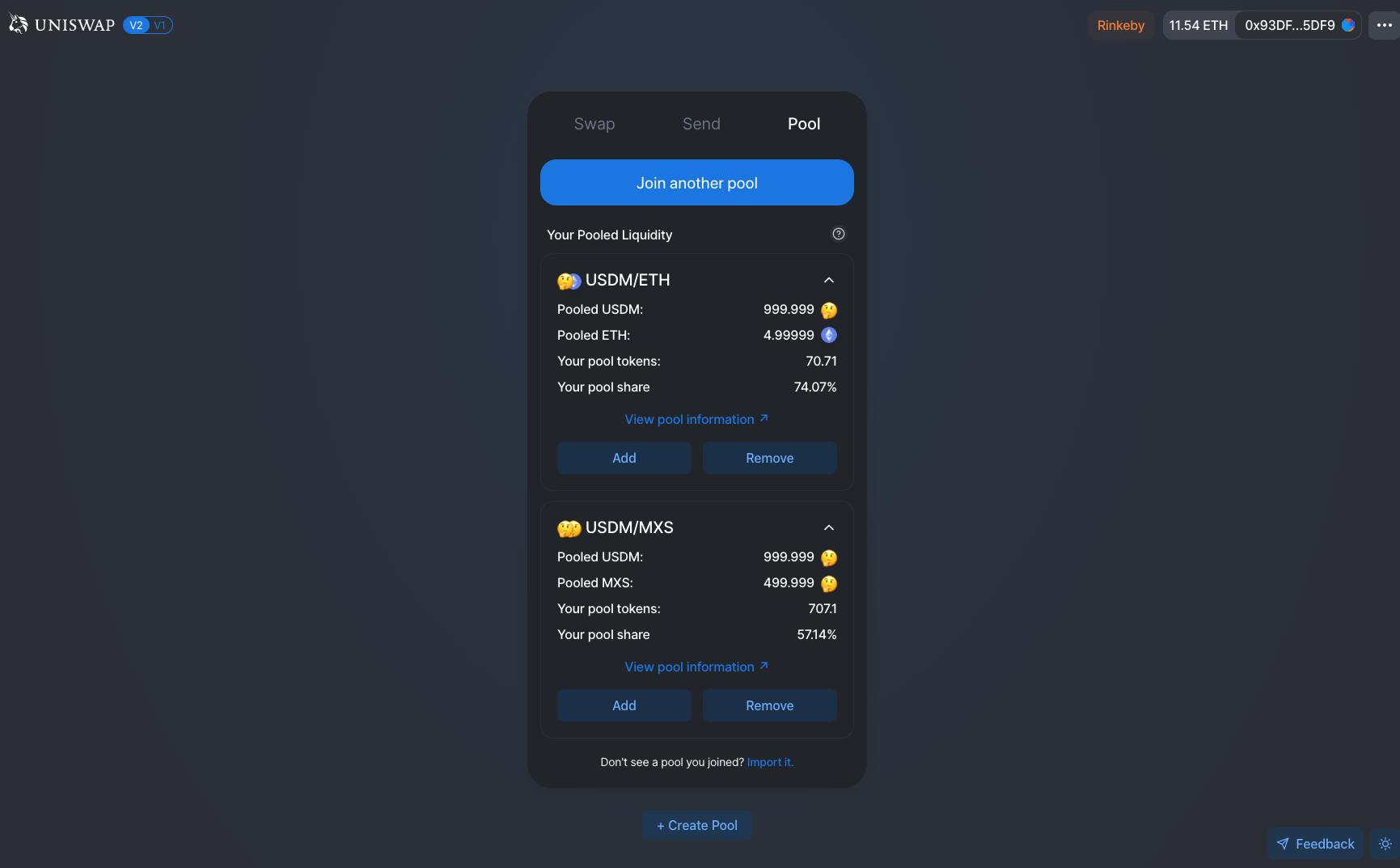 We used smart contracts written in Solidity for the decentralized money market (based off of the Compound Finance model), uniswap, and collateralized debt positions [CDP coming soon]. The contracts are built, tested, and deployed using truffle.js and some of the open source smart contract tooling from names such as openzeppelin. We're using React and NGINX to serve the web application.