We are creating: New E-Global Government on the entire Planet Earth. Digital Economy - Digital Government worldwide The world is changing in every sense: 1- Nature of Business changes 2- Nature of Relationships changes 3- Nature of Money changes We are creating a Global Digital Government to: UNITE THE WORLD CREATE A UNIVERSAL CONSTITUTION ( Smart Contract ) BUILD A NEW SOCIAL CONTRACT (For all, the entire humankind, 7Billion People) Created by common people, US, not from politicians. We have the dream to write this on the Blockchain by Smart Contracts. People, don’t trust in anything. Don’t trust in Govs, Don’t trust in politicians, Don’t trust in multinationals companies. We believe in digital, We believe exponential technologies will give us the tools to heal the planet after this Crisis and to give freedom to people to lead the world together. Little Storytelling: Once upon a time, there was a terrible pandemic that paused life around the world as people from different cultures felt suddenly taken away from the life they know, that was comfortable. Every day…. people found connection through news from those in the family, friends, and in the headlines they read about how we were all affected similarly and what actions we had to take to be safe. Then One day… the strength of that connection with others grew so strong that it overpowered the nay-sayers, government officials, and authorities trying to return to a time where white men and the ruling class had unquestioned power. What is happening NOW in the world order? (Present - June 2021) For fans of the multilateral world order, this week has been the most important week about it. It started on June 11 with the G7 Summit in England, where among other things the leaders of seven of the world's leading democracies agreed on a global minimum corporate tax rate and committed to vaccinate the world. Three days later, the leaders of the NATO (Nort Atlantic Treaty organization) countries met in Bruselas, where they laid plans to build an infrastructure project to rival China's Belt and Road Initiative On June 15 US president Joe Biden held a summit with EU leaders After that, European leaders got a breather, but Biden went on to Switzerland, to meet on June 16 Vladimir Putin, the Russian president. WHAT DOES IT ALL MEAN? other than that the White House advance team probably needs a vacation? It’s hard to say... But there is too much riding on these meetings. (climate change, war, the resilience of the global economy to future pandemics, and the recovery from this one) for it all to be hot air. Summits are a good thing, but only if they trigger action, not more summits. As Henry Kissinger warned, “When statesmen want to gain time, they offer to talk.” It’s our turn: WE THE PEOPLE. We have to ACT. (Creating a Global Digital Government) It's the turn of others countries as well, not only the countries of G7. To do this, we are starting to unify the entire world with Special Economic zones first, like European Economic Community but starting from small countries, of course, the most ambitious goal is to unify the entire planet earth at the end. Yet we have to start joining little by little first. This is the project we are starting with: http://sez.network At the same time, we created International Passports on the Ethereum ecosystem. To sum up: Global Planet E-Residence. Global digital Government on the entire planet Earth. Digitalizing Governments, digitalizing citizens around the world. The purpose is to give freedom to people. Everyone belonging to the same reliable digital jurisdiction, THE EARTH. We are creating our Web3 media & community projects. With Blockchain voting and Open Web, we are ready to build an open digital Global Government together!! If this resonates with you please contact me: joanna@jp.network Help us. 🙏🏼. We need you! 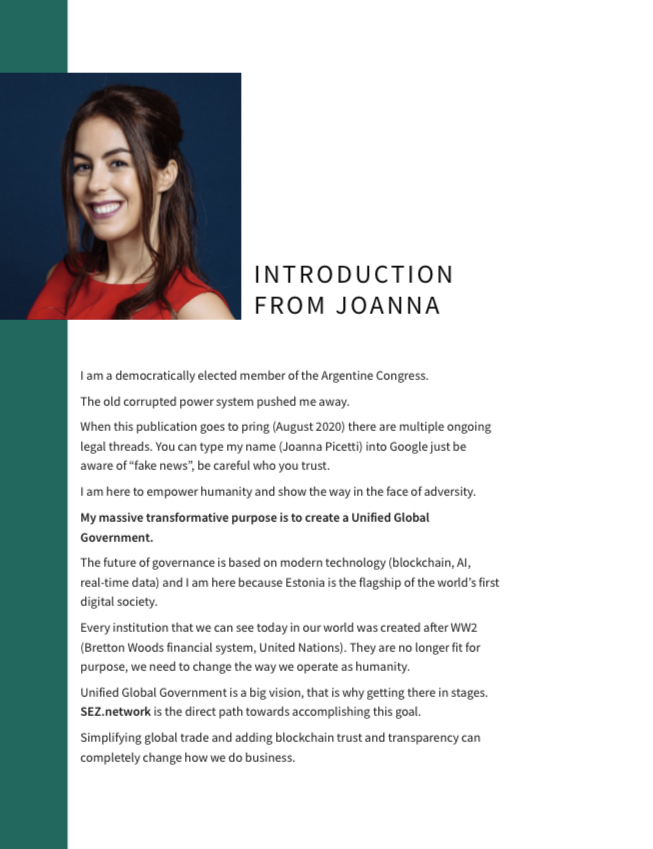