Talon is a Dapp that connects a persons Twitter account to their Ethereum wallet. Talon allows NFT creators to showcase the owners of those NFT in real time. It also reinforces trust that a twitter user can prove they are the owner. 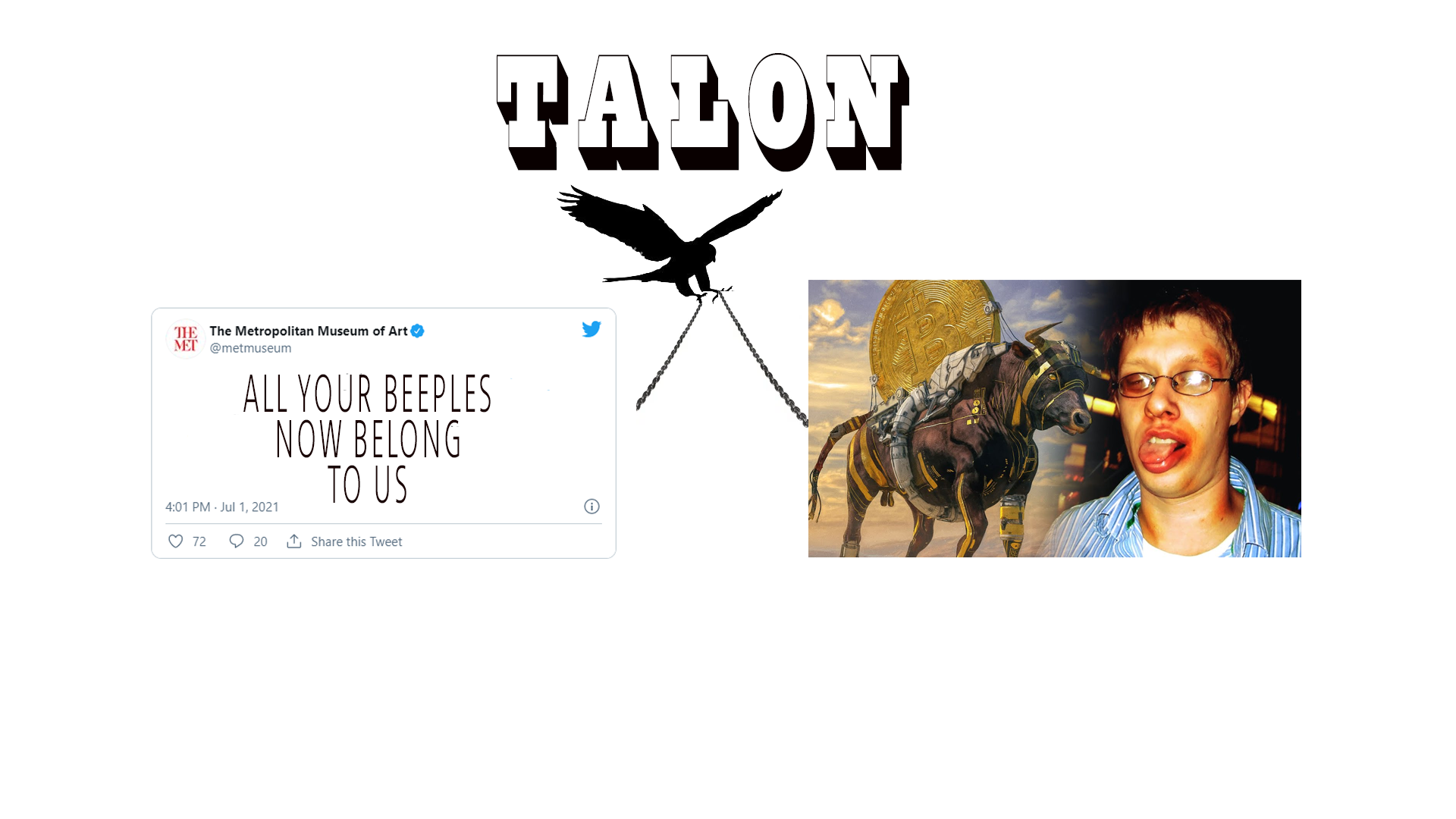 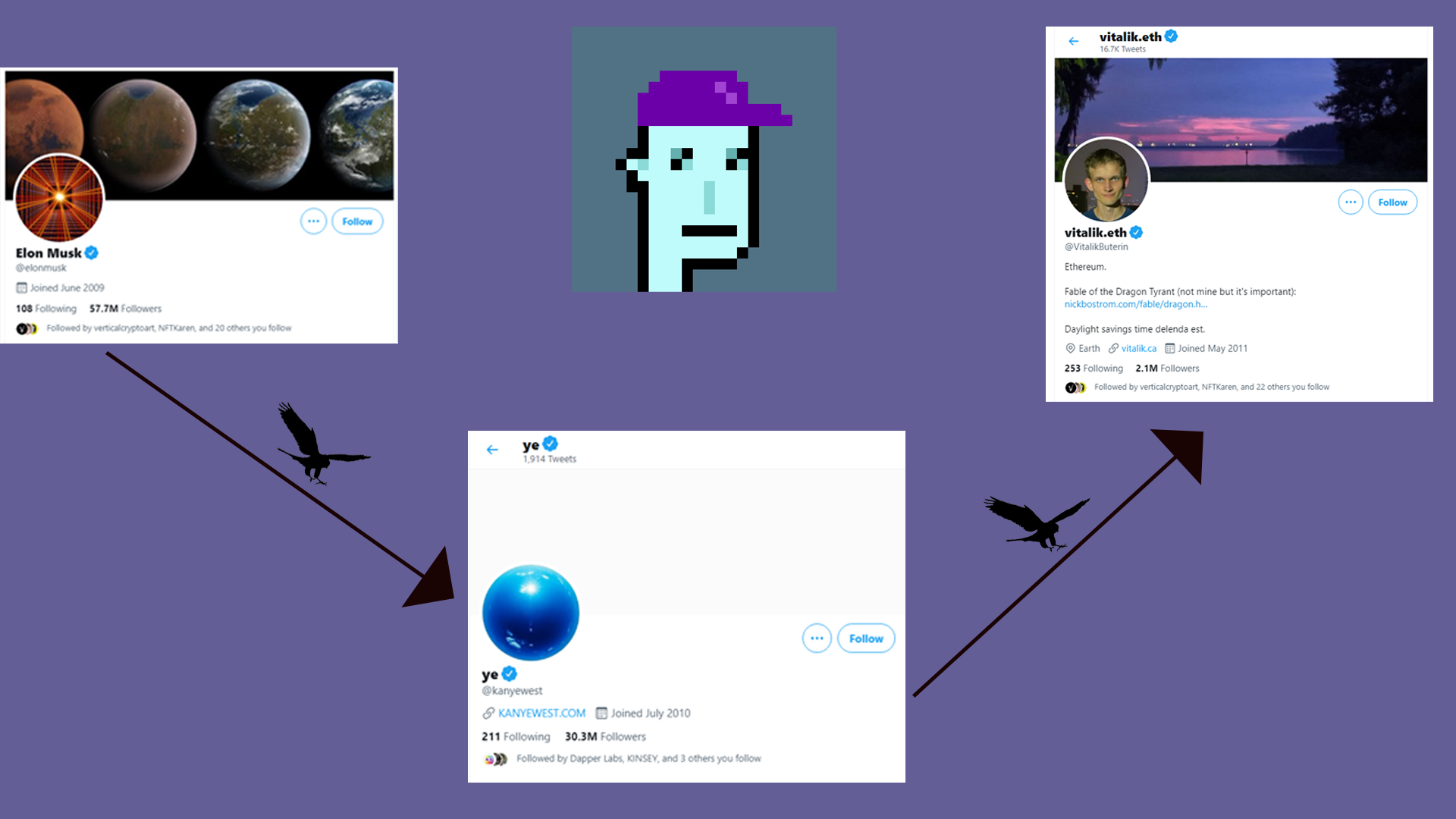 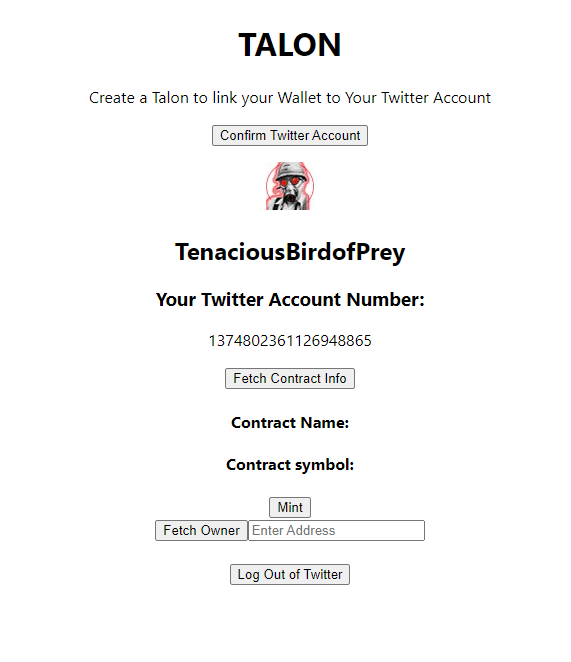 Talon is an easy to use dApp. An NFT minter that connects a persons Twitter account to their Ethereum Wallet. It combines the authenticating power of the blockchain with the social power of Twitter. With Talon both the NFT Artist and the collector benefit from this easy to track, easy to access system. In this age of misinformation and false claims, Talon cuts through the mayhem. The idea for Talon originated from a simple problem that arose after a Token called Sacks was created to raise money for a charitable cause. This coin was passed from one twitter user to another. There were 2 problems. There was no way to visually show on a website which Twitter user had passed the coin to another in real time, and also anyone could easily claim to have a token with no real way to verify ownership. The solution is Talon. With a Talon, Artists can display who currently owns their works in their own portfolio or auction page. For example if the New York Metropolitan of Art purchased an NFT that Artist could then display that ownership in their portfolio using Talon. This would allow the artist to demonstrate the value of their works to future collectors. Collectors could also add value to the NFT’s they’d like to sell by showing which Twitter users previously owned that NFT. Talon would provide the links so Twitter profiles of the all the prior owners could display next to the NFT. Talon works by deploying an ERC721 contract that requires Twitter authentication in order to be minted. In that authentication process the Twitter users unique account number is provided as the Token ID. Since no two Twitter users have the same account number, and since the ERC721 contract won’t allow duplicate Token ID’s, you can then easily link the Twitter account to that specific wallet. You can the query any ERC721 contract. Let’s say Twitter User “I_eat_satoshis_Lunch” claims to be the owner of a rare NFT. You would simply get the Token ID of the NFT he claims to own, query that token ID to get the address of it’s true owner. Then enter his twitter account number has a Token ID for Talon and if the returning address match they are telling the truth.

This project has simple bones, but once connected creates a powerful tool. It uses a standard ERC721 contract. However the TokenId is not set to auto-increment, and anyone can call the contract to mint their NFT. In order to successfully mint the NFT the user must authenticate their Twitter account using Auth0. Auth0 returns that users unique Twitter account number. That unique account number is passed to the contract as the TokenID for the NFT. You then have provable ownership of a Twitter account to an Ethereum Wallet. You can then submit a users Twitter account number to the contract to confirm their address by using the OwnerOf function in the open zeppelin ERC721 contract. I didn't use sponsor technology, but I believe Rarible would find this extremely useful for increasing the value of NFT's for their market place. Artists could display real time information on the current Twitter user who owns their work. You could also keep track of provenance using Talon. Social Media Influencers could buy NFT's, linking their Twitter account to it, and then re-sell it. Ask yourself how many people would love a Doge NFT if they could prove Elon Musk's Twitter account owned it and sold it to them. I would say using Auth0 to is in the spirit of "hacking" as it isn't originally intended to be part of an NFT minting process. I impressed myself, because I had no idea how to use React at all before I started this project. I had no clue how to incorporate an Open Zeppelin contract with a front end.