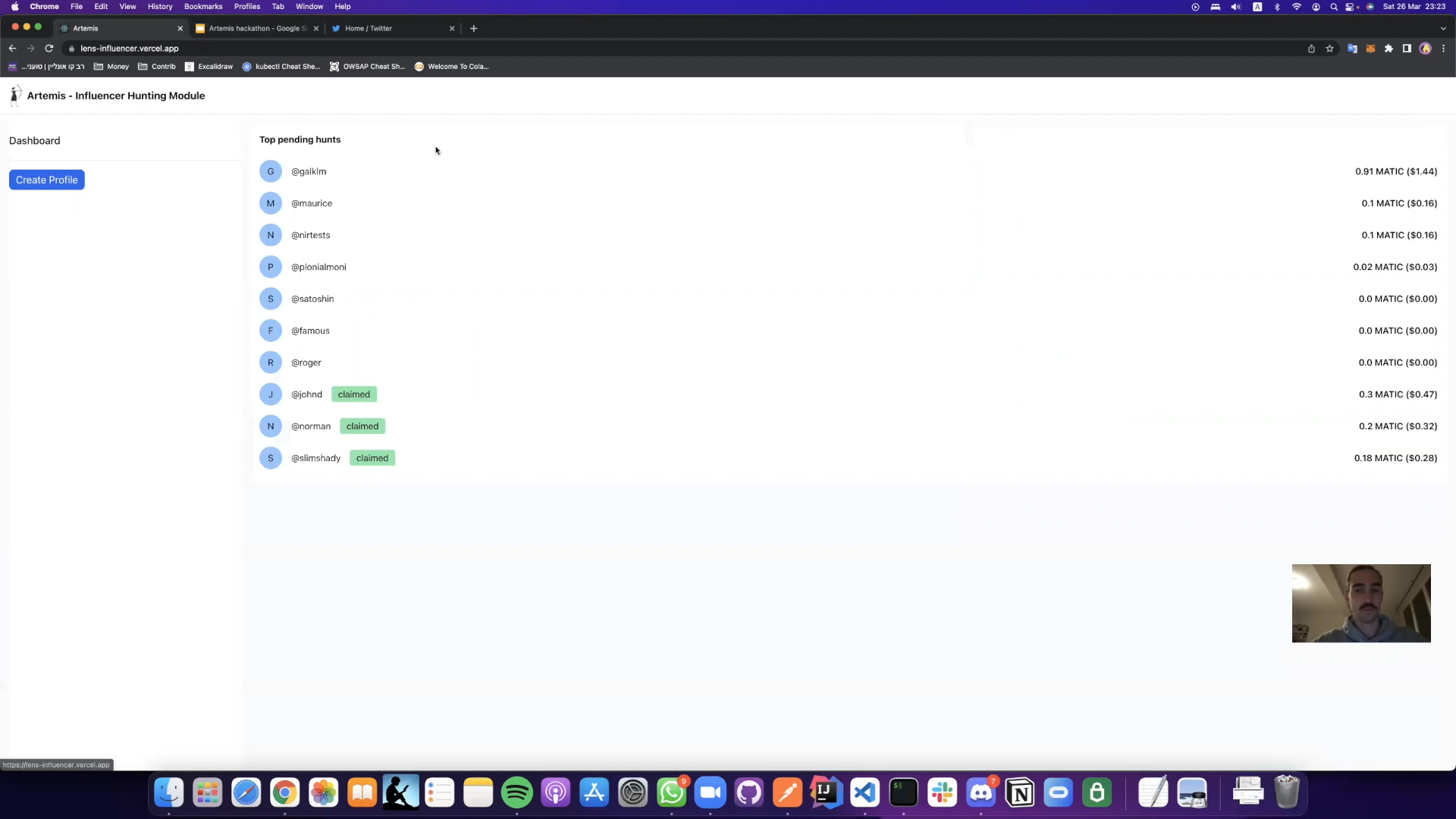 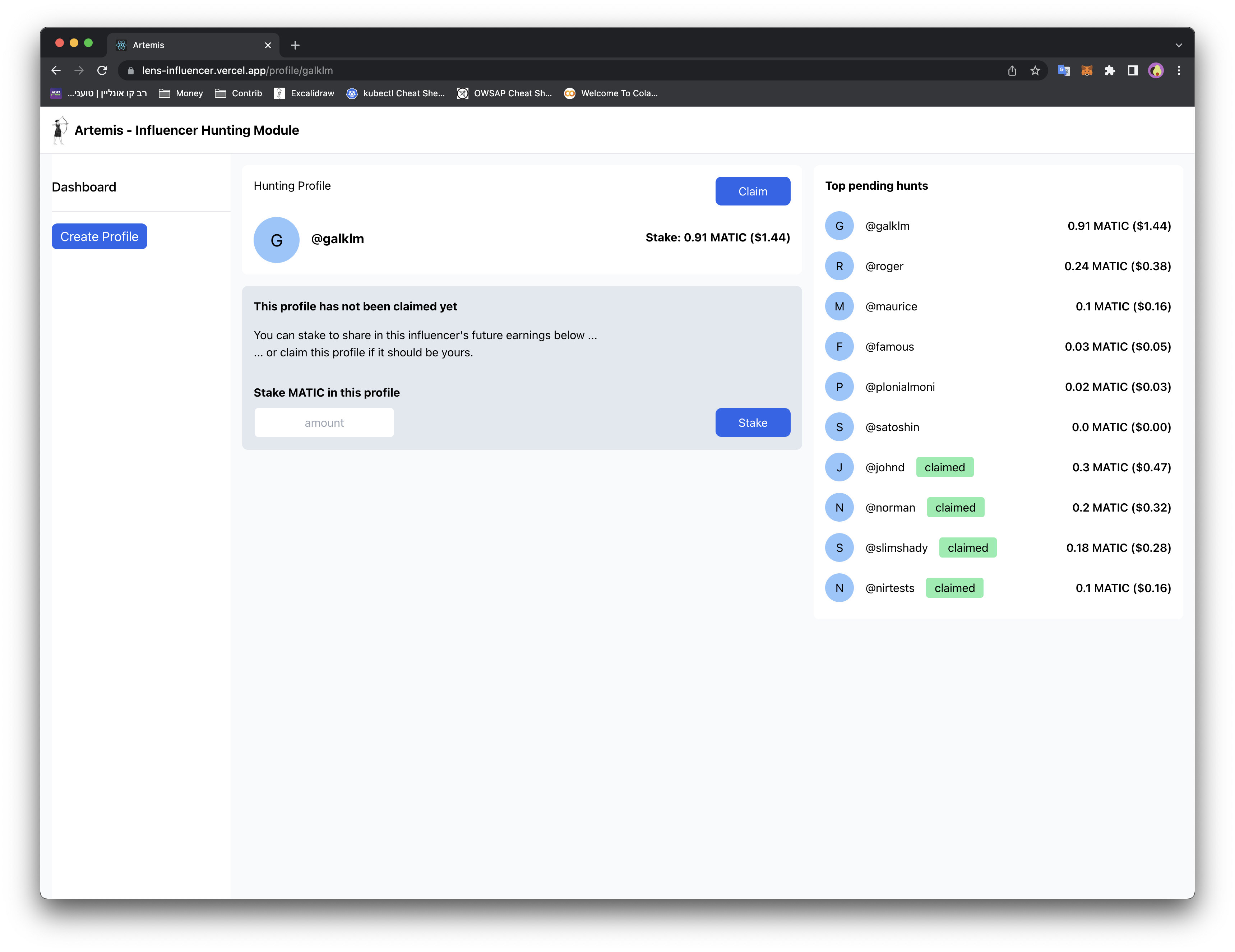 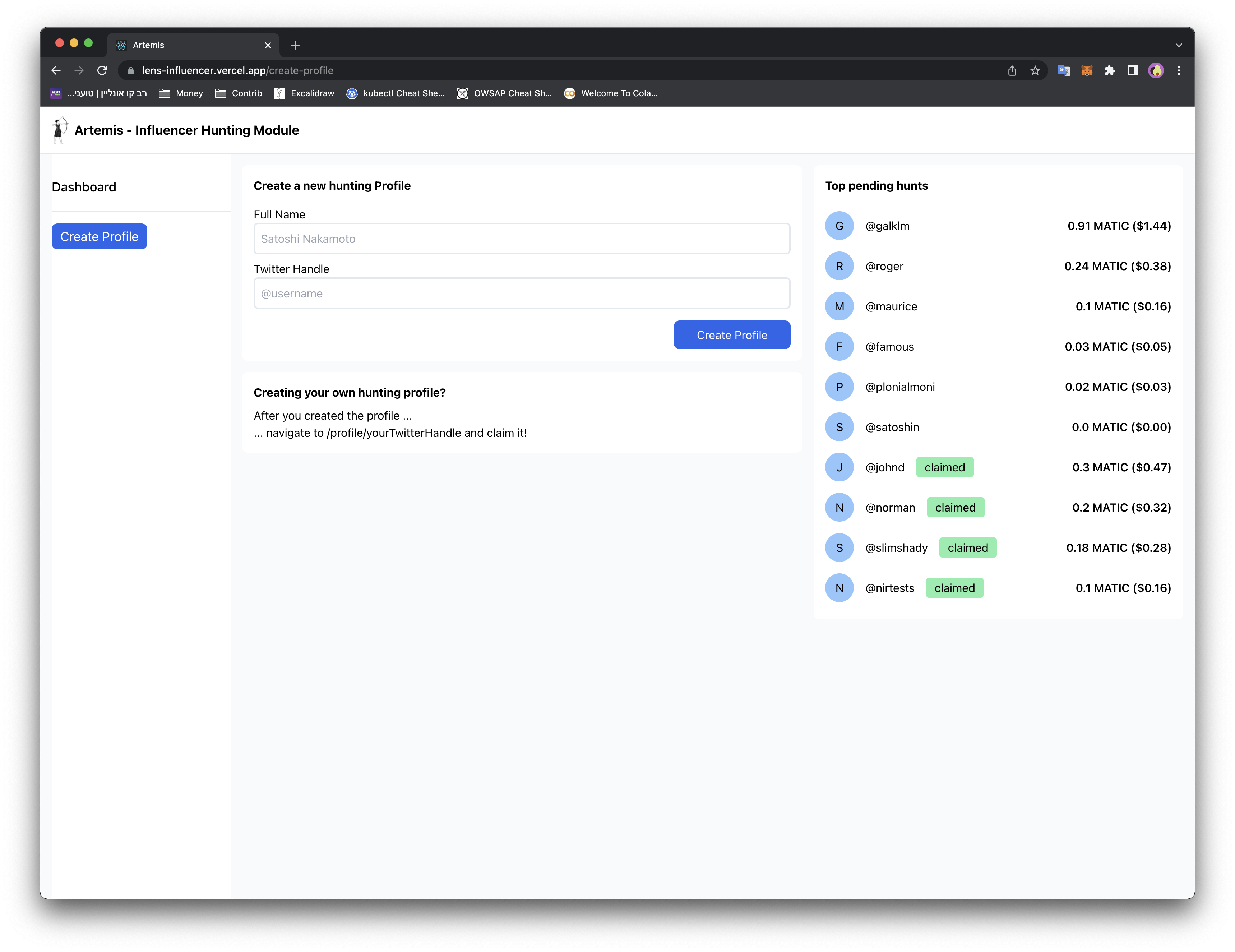 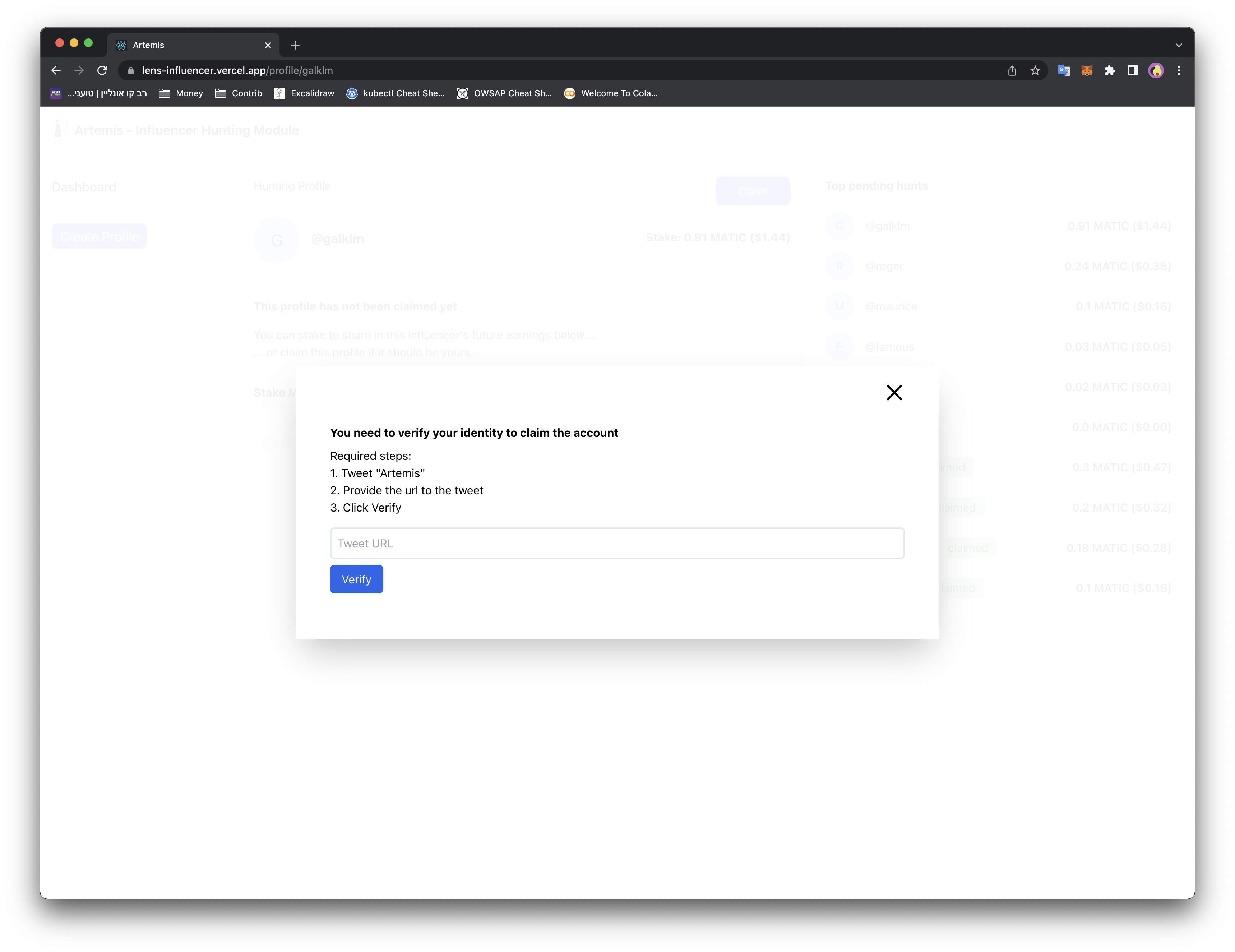 The idea behind Art3mis is to incentivise influencers to join the Lens protocol, in order for them to own their profile and be able to use it across multiple social platform built on top of Lens. The way we make this happen is by creating a vampire attack system that could be integrated in any social platform built on top of Lens in which various stakeholders contribute and benefit from it. On one side, there are influencers, having various profiles on web2 social platforms, but not yet on Lens. On the other side, there are hunters, whose role will be to hunt such influencers and get them to join the network., while being reward for it. Hunting module: - Hunters hunt for non existing influencers profiles, and create those on their behalf (based on Twitter handle) - at this stage, such newly created profiles are pending (still to be claimed by the influencer, who is expected to own it) - The idea is that hunters will earn a share of revenue generated by such profiles, and will be incentivised to stake on those profiles. Influencers will be able to claim such pending profiles, and earn amounts that have been staked to it (by a series of hunters) - Hunters can then stake funds on various pending unclaimed Lens profiles to increase the financial incentive for influencers to join - the more staked amount there is for the influencer to grab, the more chance such profile will be claimed Claiming profile module: - When an influencers judge he has gathered sufficient incentive to join, he can claim his profile, by transferring it to his wallet while claiming the staked amount - Influencers will have to prove their identity by proving their ownership over their Twitter profile by posting a public key Claiming rewards module: - Based on the follow functionality in Lens, profiles will earn money through expanding their network, as more other profiles follow them (and pay for it) - Hunters are entitled to earn a share of such generated revenue in proportion of their stake - Hunters will have the ability to claim such rewards via a claiming functionality 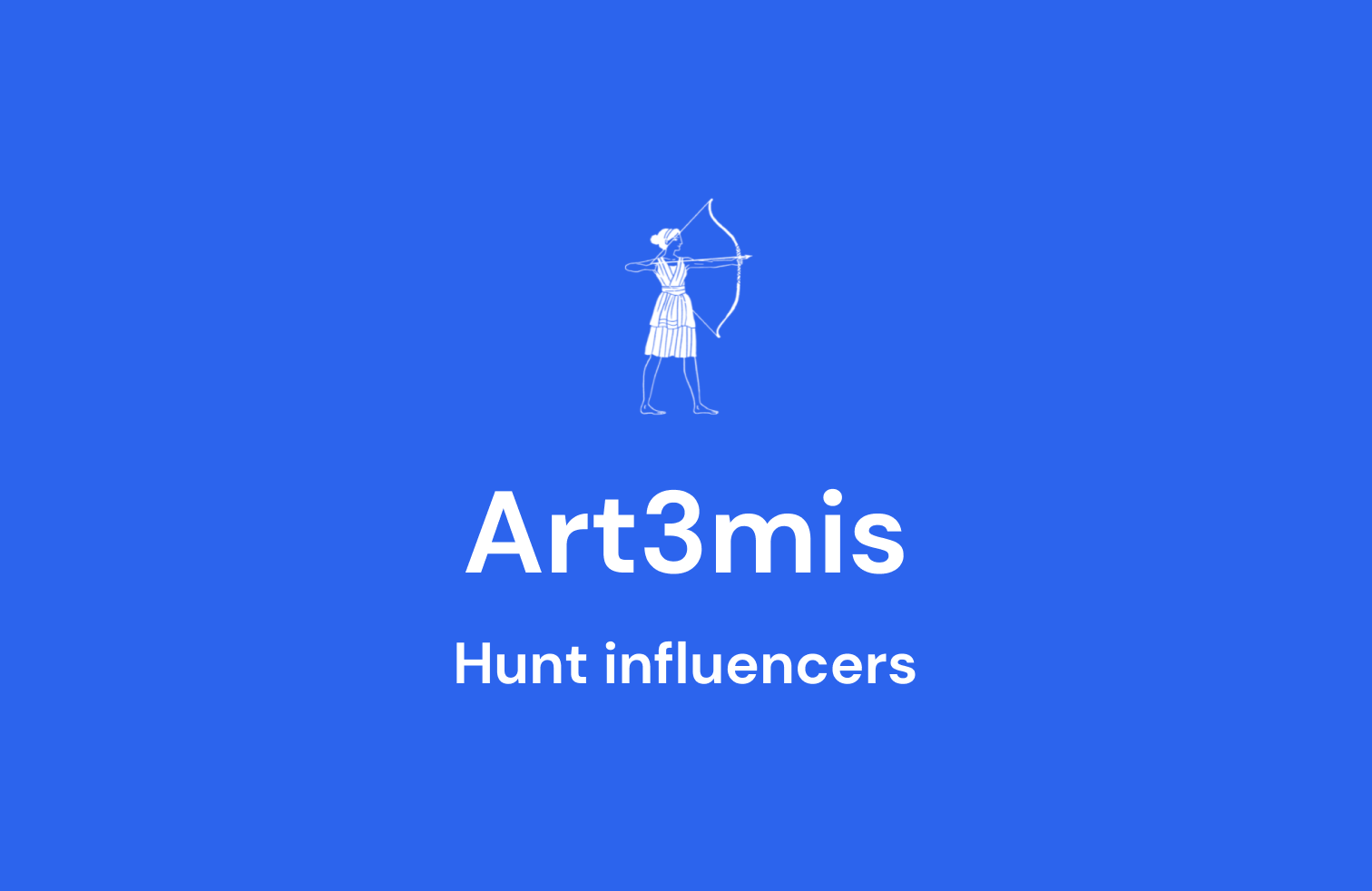 We're creating lens profiles for hunted accounts at the moment of creation. Users can then stake MATIC tokens on those profiles. When a user wants to claim a profile we use Chainlink to verify with Twitter API that the user posts a certain passcode we ask her. We created a proxy (https://github.com/nirga/twitter_proxy) to which we send those verification requests because we didn't have time to actually set up a Chainlink node and we wanted to use some ready made Chainlink nodes from the marketplace in the Mumbai network. Getting royalties for the hunters after a profile is claimed by the influencer is done via Lens modules - during claiming we set modules such as FeeFollowModule to collect follow royalties and distribute them according to the amount staked.

Created at
LFGrow
Winner of