Pay salaries to scientists, free software authors, etc. using money transfer from the future accordingly to traders predictions of future oracles. We can collect money during 100 years in the future. 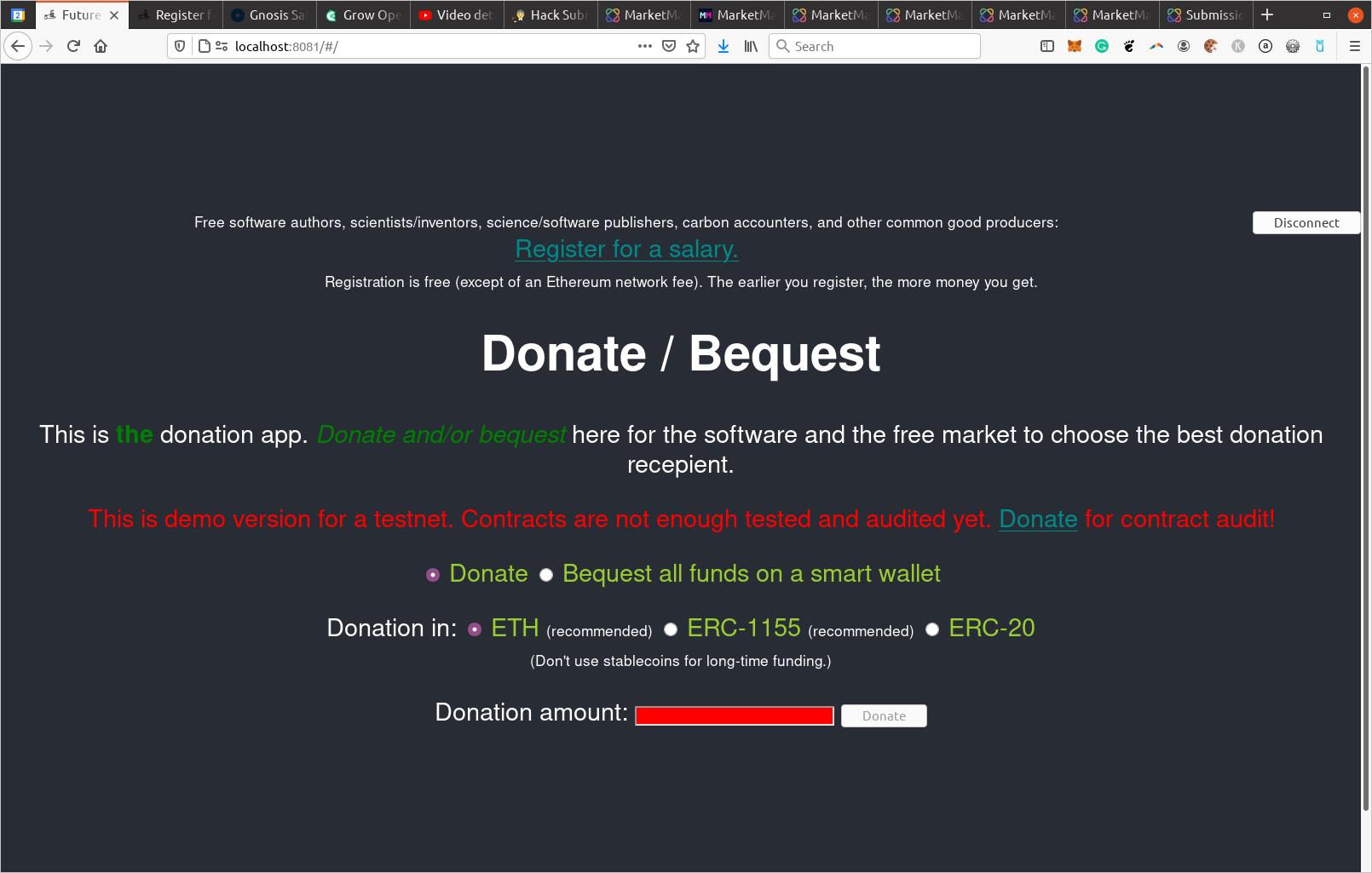 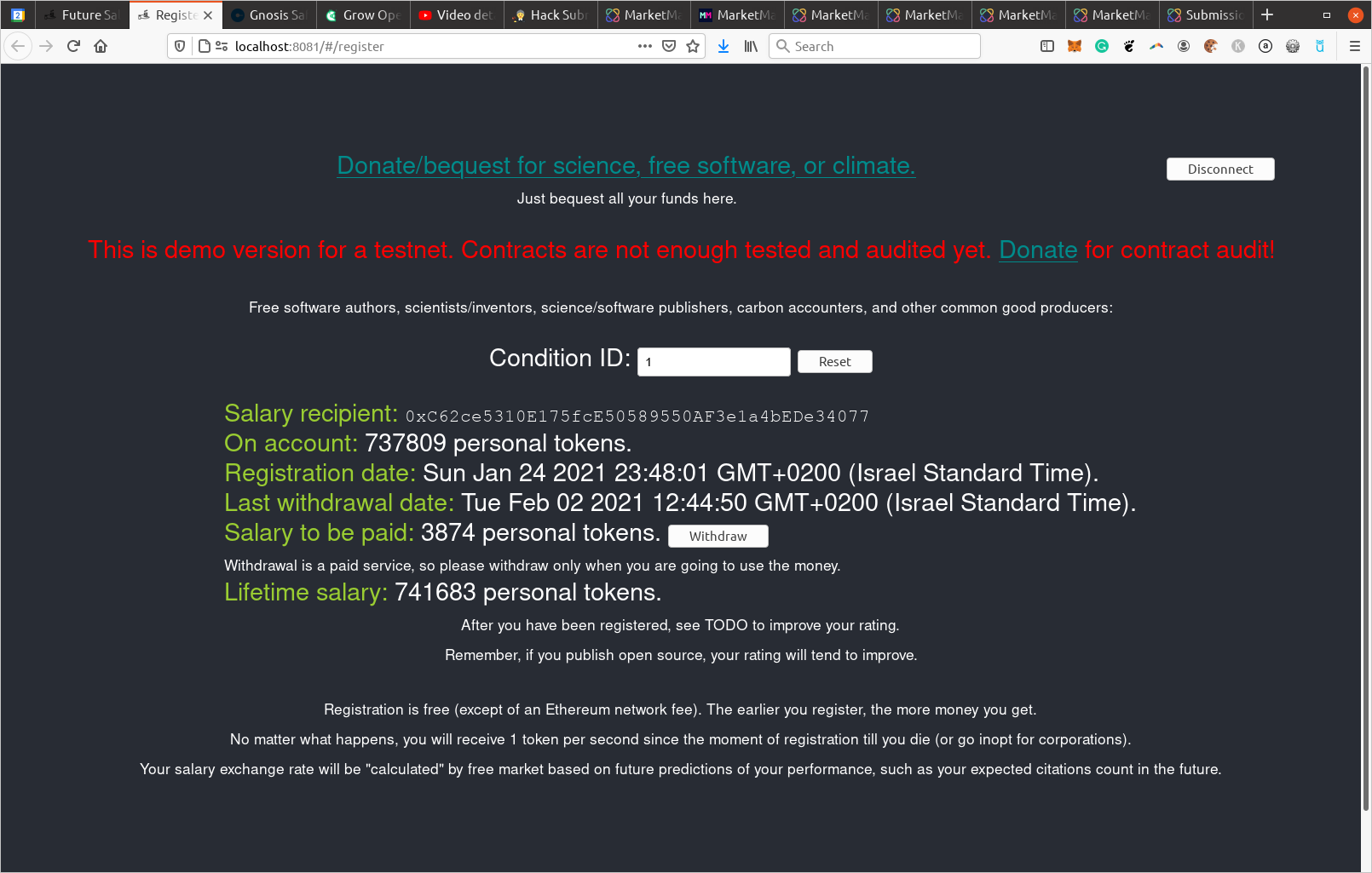 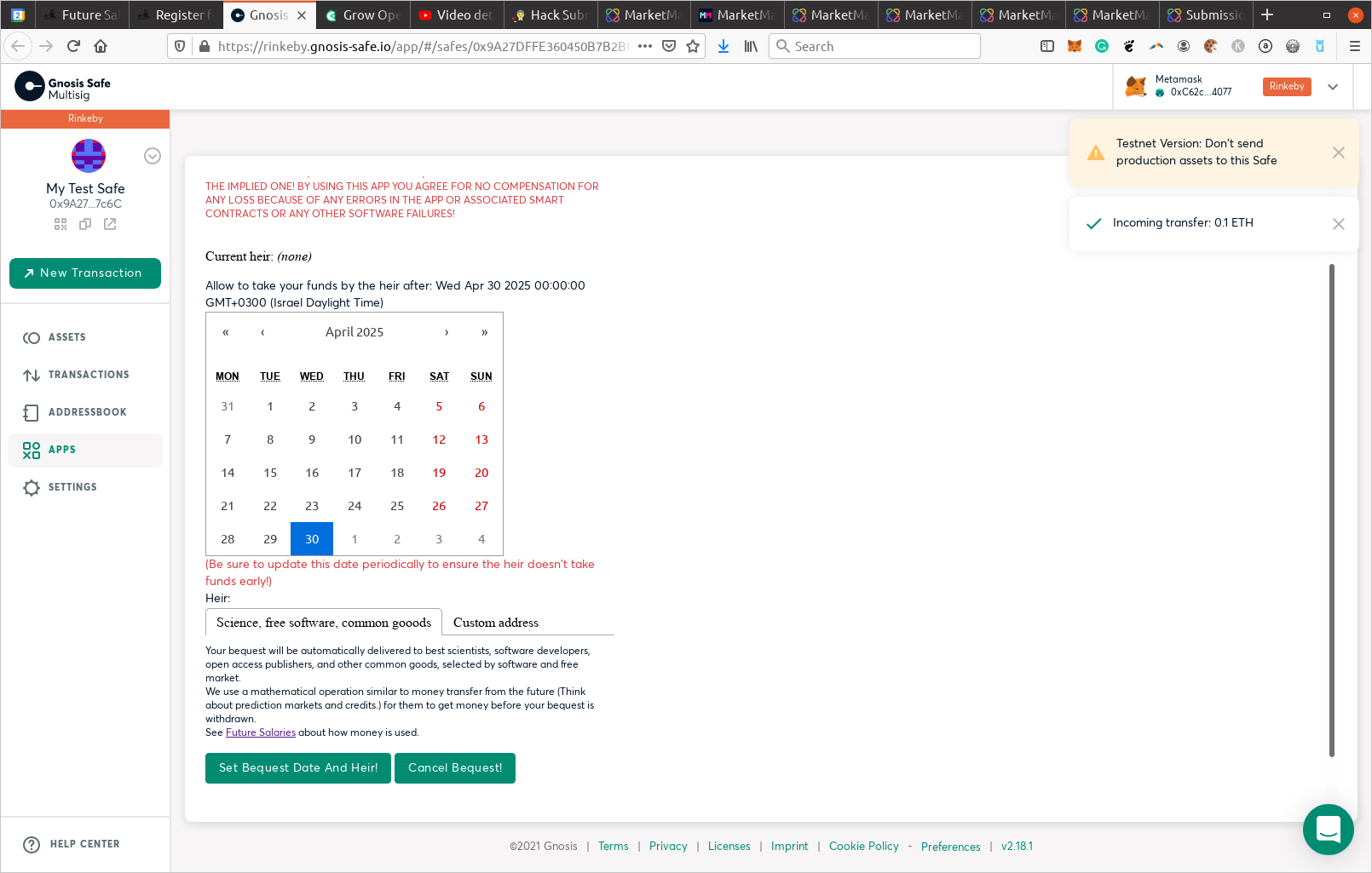 https://github.com/vporton/donations + https://github.com/vporton/future-contracts + https://github.com/vporton/bequest-safe-app + https://github.com/vporton/safe-modules/tree/bequest/bequest + https://github.com/gitcoinco/web/pull/8265 I modified "prediction markets" from gambling to get "money transfer from the future": Accordingly, my mathematical model, the amount of money withdrawn from the contract is equal (relatively to market sizes) to the amount of money put in the future. For money transfer from the future to work well, traders need to know the future well enough and follow simple rules for profit maximization. I use it to pay salaries to common good producers (such as scientists and free software authors, even carbon accounters - in conjunction with my other project) using money transfer from the future accordingly to traders predictions of future oracles, e.g. citation counts or something like this after 100 or 50 years. We can collect money (donations, taxes, even a fee from miners) during 100 years in the future to pay to us huge salaries soon. Common good = future, so in a sense, it is the fairest way to pay salaries we can think of. Let the market decide, not centralized authorities. Which oracles to use can be decided by global voting (in the future): an oracle that decides ("bootstraps") other oracles, and a prediction market that predicts prediction markets. To do this I create a market that provides a monetary stimulus for traders to calculate common good producers' salaries. Because we have 100 years to gather donations, it is reasonable to bequest in addition to donating, so we grab users' wallets who bequests them to us. It is possible to donate/bequest DeFi tokens with all their future profits. There is also a GitCoin pull request to integrate this dApp into GitCoin site. I also made Bequest app for Gnosis Safe (on Rinkeby, not yet on Mumbai, but I am working) smart wallet that can be used from this project or independently. Note that I apply for AAVE prize because my app supports accepting donations in DeFi tokens together with all their future profits, which is quite useful for AAVE's promotion of adoption aTokens. - https://github.com/vporton/GECO/blob/prediction-of-predictions/Proposals/assets/PredictionOfPredictions-slides.pdf (presentation) - https://github.com/vporton/gitcoin-web/blob/future/app/assets/docs/science-salaries.pdf (scientific article) Deployed on: Rinkeby, Mumbai (without bequest), BSC Testnet (without bequest). MVP ready. Before real deployment need money ($3000) for an audit of contracts. Why is this project important? I discovered about 3-4 new fundamental branches of mathematics. Nobody other (as far as I know) in History discovered more than one. And I get zero rewards for this. That's unfair, we need Future Salaries. Moreover, if we don't raise money for publishers to do SEO of such underrepresented works as mine, the development of science will cease because some important parts of it are missing in Google SERPs (and one missing part can break the entire science), and therefore mankind will die. How can we raise money? We collect money in the future 100 (or maybe 50) years, that may be for example money from the future world government. We can even ask the network to transfer a part of the miner's fees directly to my contract (Why not? it's the only fair social goods contract.), but that may create the danger of a fork, so it needs to be carefully considered before announced.

It is a Solidity + Vue dApp + Gnosis Safe. ERC-1155. Particularly hacky were exact details of the condition market contract. Also, a great hack is to create a new token at every outgoing transfer (to remove the incentive turn my software into an assassination market) and "combine" several resulting tokens into one for easy payments. I wrap tokens of other contracts as their hashes. But the greatest thing in the project is the idea (see the scientific article).