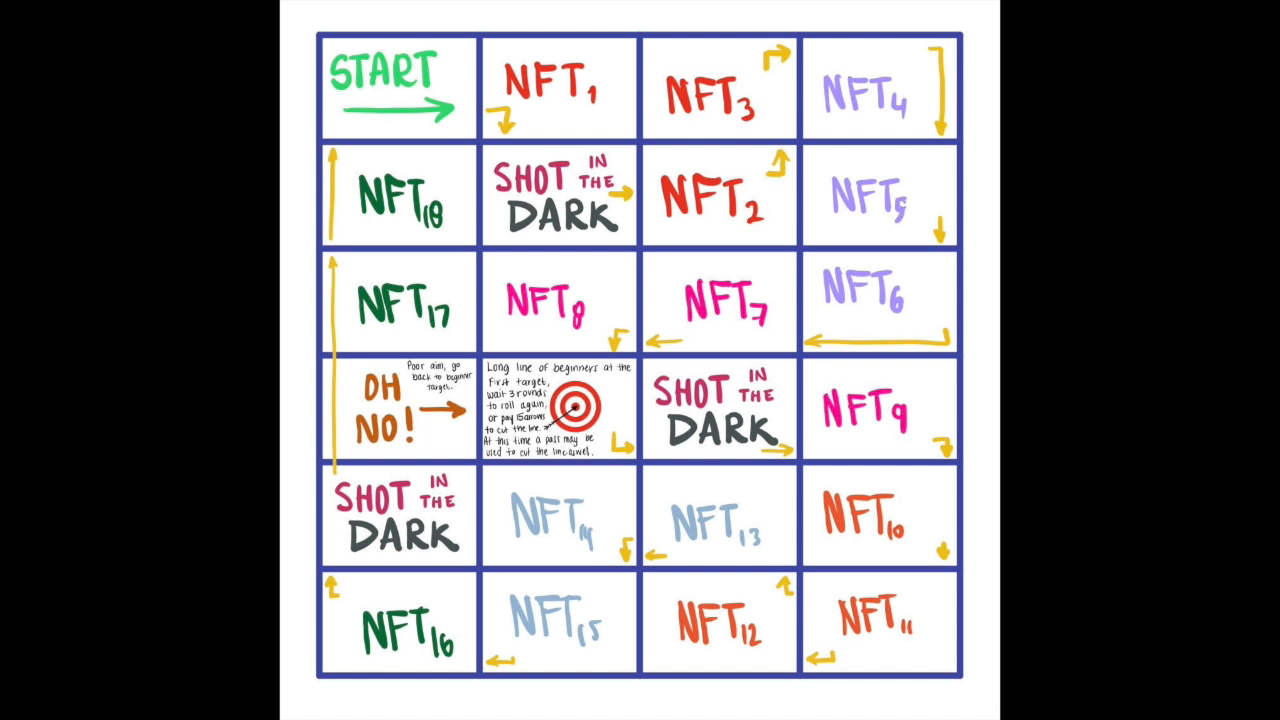 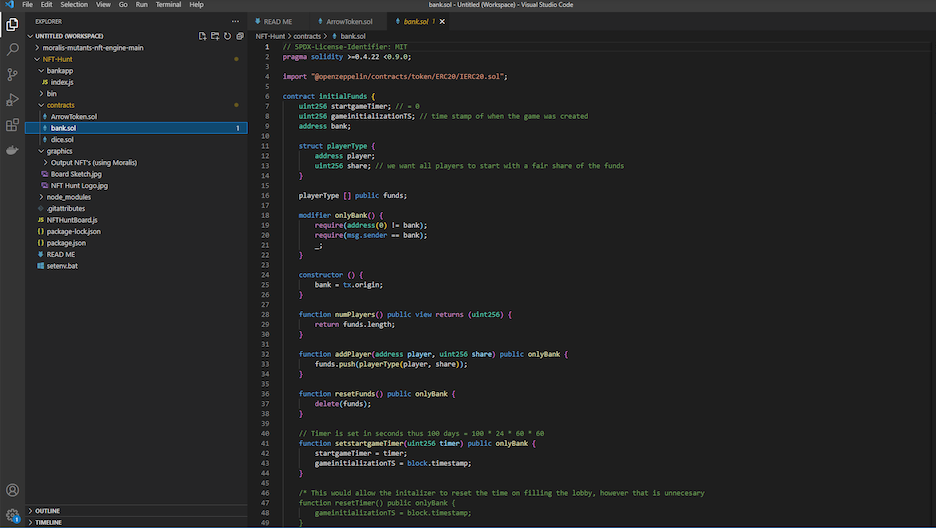 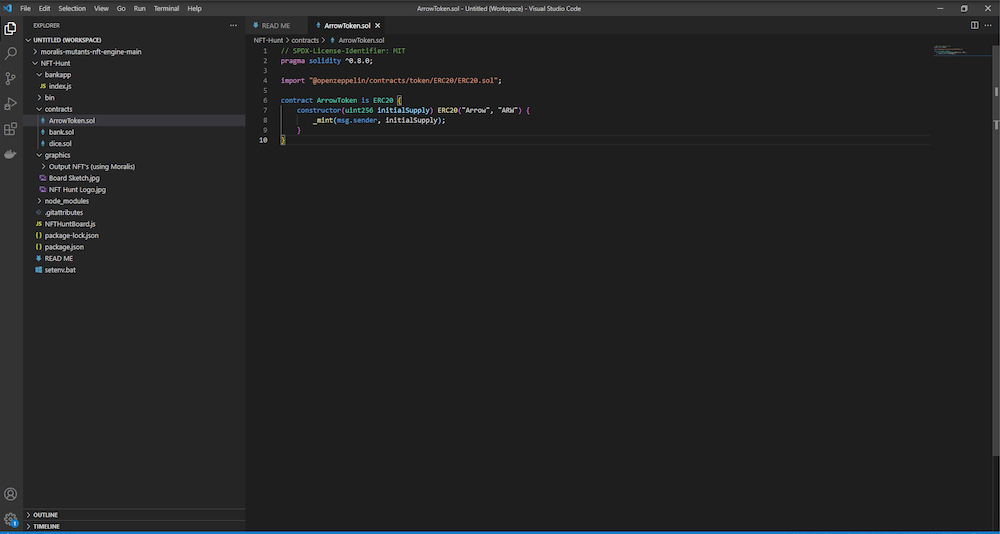 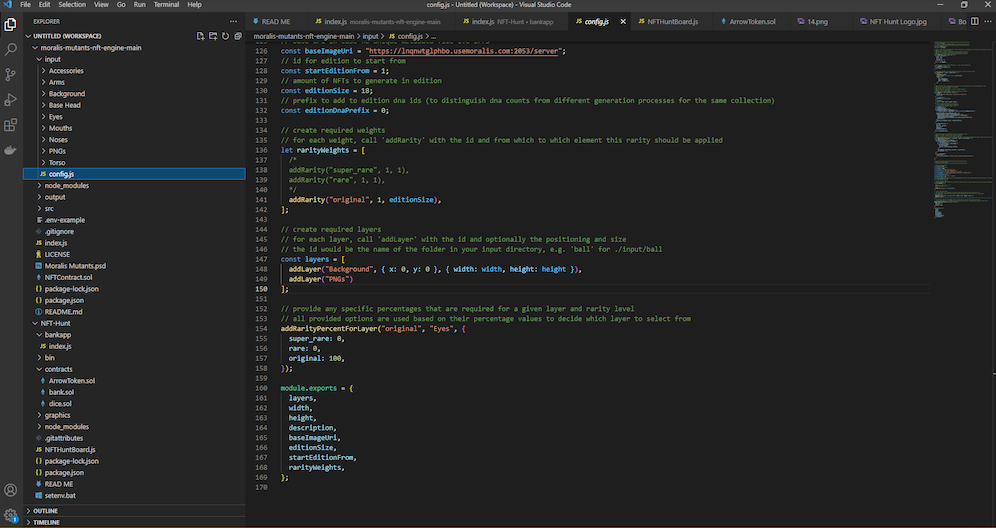 # NFT Hunt NFT Hunt is a play to earn blockchain/Web3 game. The game is modeled after Monopoly or Candyland style boardgames. ## HOW TO PLAY The game is started by a player staking a given amount. The first player also determines how long they wish to "wait in the lobby", meaning that they determine how long before that attempt at a game is not filled, and the money staked is refunded. Once the "lobby" is filled with 2-6 players and the time has elapsed, the game begins. There is a bank that is initialize with Arrow token (created for in-game use, no real monetary value outside the scope of the game is intended). The board is then initialize with a new set of NFT's, these are created using Moralis. Each player is initialized with the same predetermined quantity of Arrow. The players then use "roll the dice" which is done using Harmony's Verifiable Random Function (VRF). The players then move along a board. Each space is an NFT which is then offered for the player to purchase in-game. When another player lands on an NFT that is already owned in-game, they must pay a fee to the owner in Arrow. The in-game NFT's can be sold back to the bank and to other players during the owner's turn. There are also spaces on which there is no NFT for purchase, but rather the player is given a special "card" which has special actions, such as moving forward or backward extra spaces or gaining/losing Arrow. Each pass through the entire board the players are awarded more Arrow. The goal of the game is to own all the NFT's and eventually collect all the other player's Arrow. ## Winning the Game / Incentive NFT Hunt is a pay to play game. In order to enter the game players pay the contract. At the end the player that wins the game gets to keep all the NFT's generated for that round and the money that was staked by the players to initialize the game, minus some small fee for the game to be profitable. ## Game Theme Currently NFT Hunt follows a hunting theme. This is done as a sample, however in future iterations this can be done with different themes. The special cards are labeled "shot in the dark", the logo features a target, the NFT's that will be generated should also follow the theme. Other ideas for themes can include splatter art as NFT's in a 70's theme, etc. 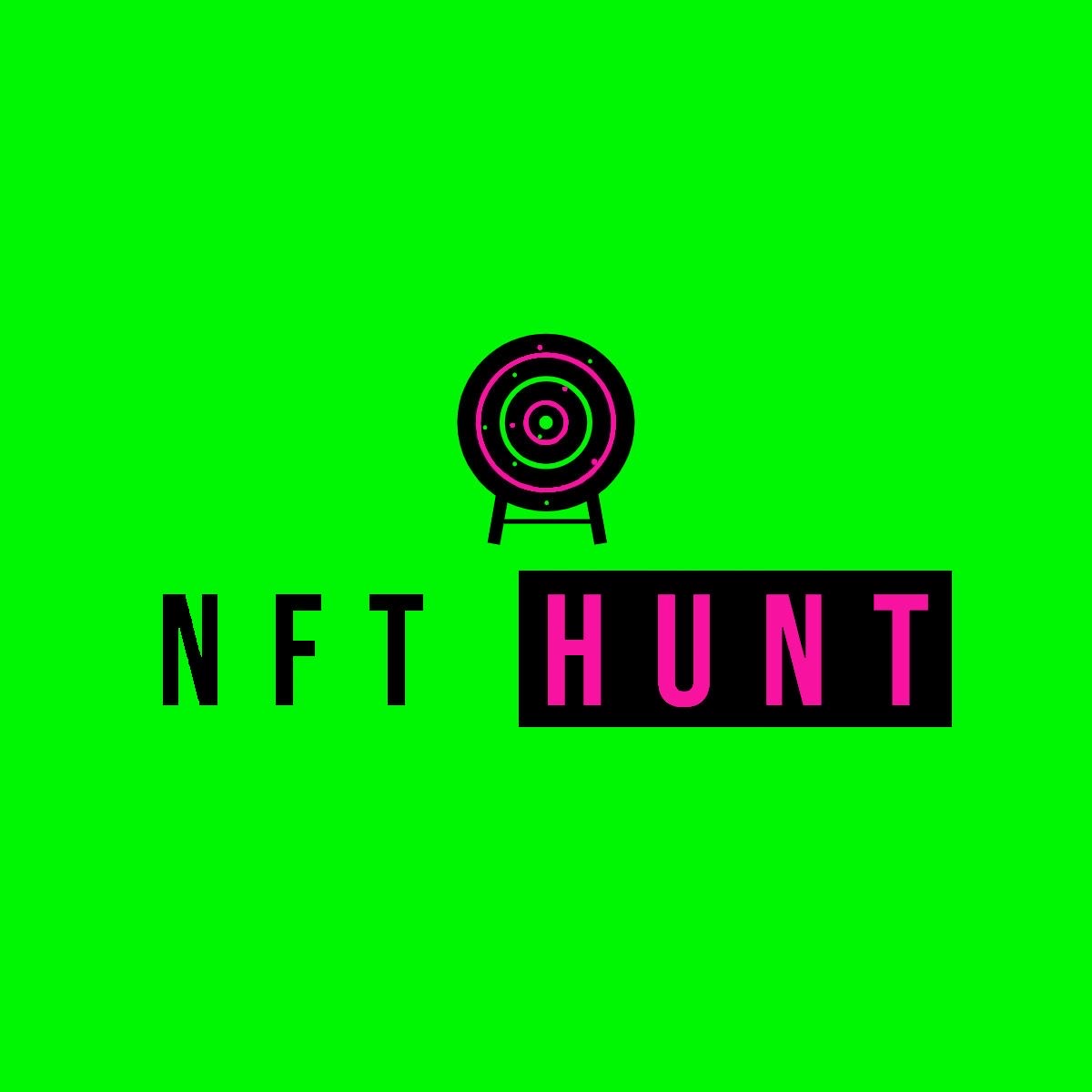 ## Technical details The back end is written in solidity using the Harmony blockchain. For each game, a new bank, dice and game smart contract is deployed. The contract deleted when the game has come to an end and the winner has collected their NFT prizes and stake. The front end visual board game is written in react, and will be deployed on IPFS, in order to avoid content modification hacks. Once again Moralis can be used for connecting the wallet and user/account verification for players. ## Resources * Sample React board game: https://github.com/RomanSery/react-monopoly-board * Creating NFT's: https://www.youtube.com/watch?v=KBV4FrCv4ps and https://github.com/ashbeech/moralis-mutants-nft-engine * Making NFT games: https://moralis.io/what-are-nft-games-and-how-to-make-nft-games/ * Harmony VRF: https://medium.com/harmony-one/introducing-harmony-vrf-4fc51e175c2 * React board game resource: https://boardgame.io/?ref=madewithreactjs.com * Moralis Server: https://admin.moralis.io/servers * Deploying NFT's to Harmony: https://docs.harmony.one/home/developers/tutorials/deploying-hrc721-nft ## Non-technical Resources * NFT sample backgrounds: https://www.canva.com/flashcards/templates/