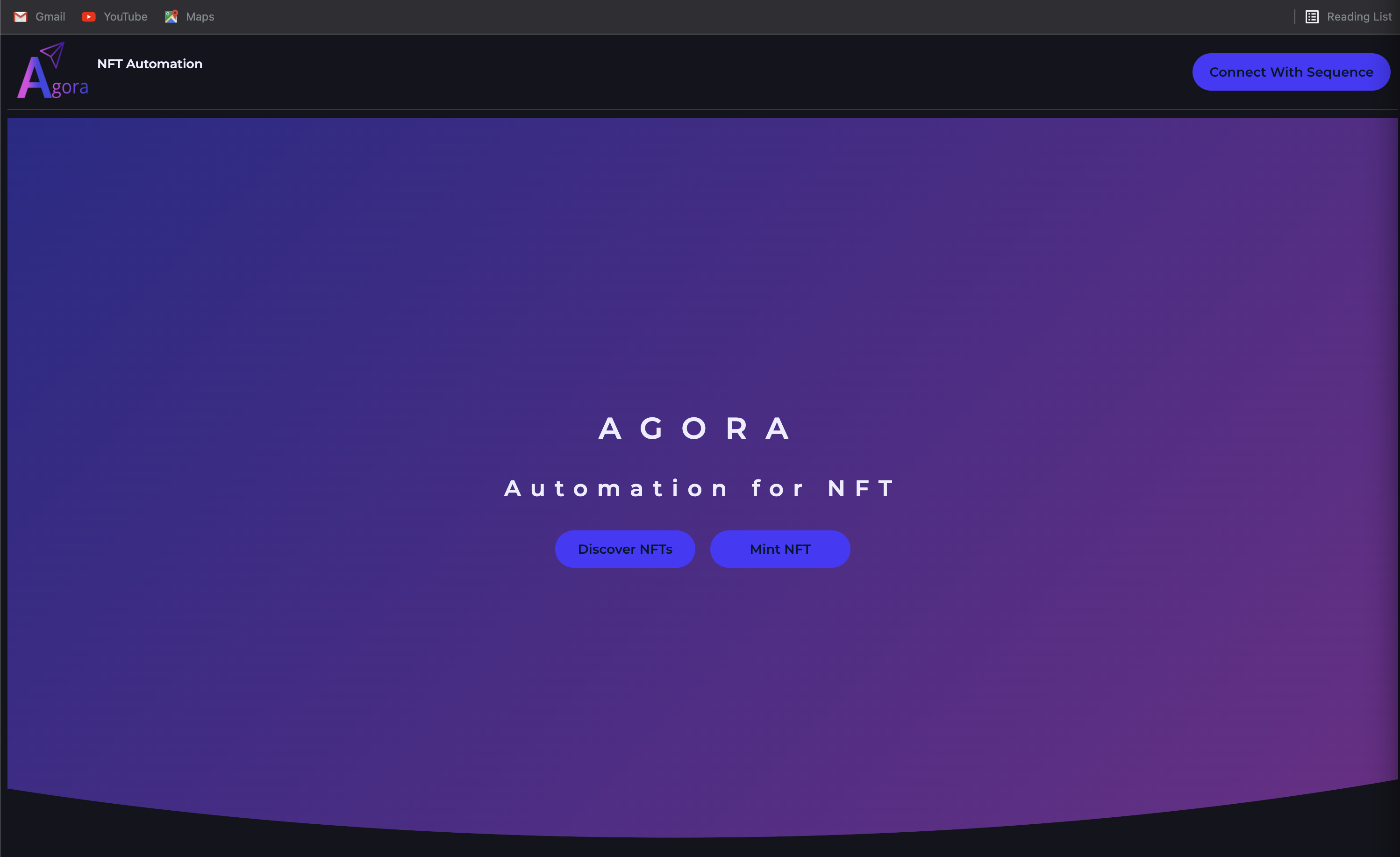 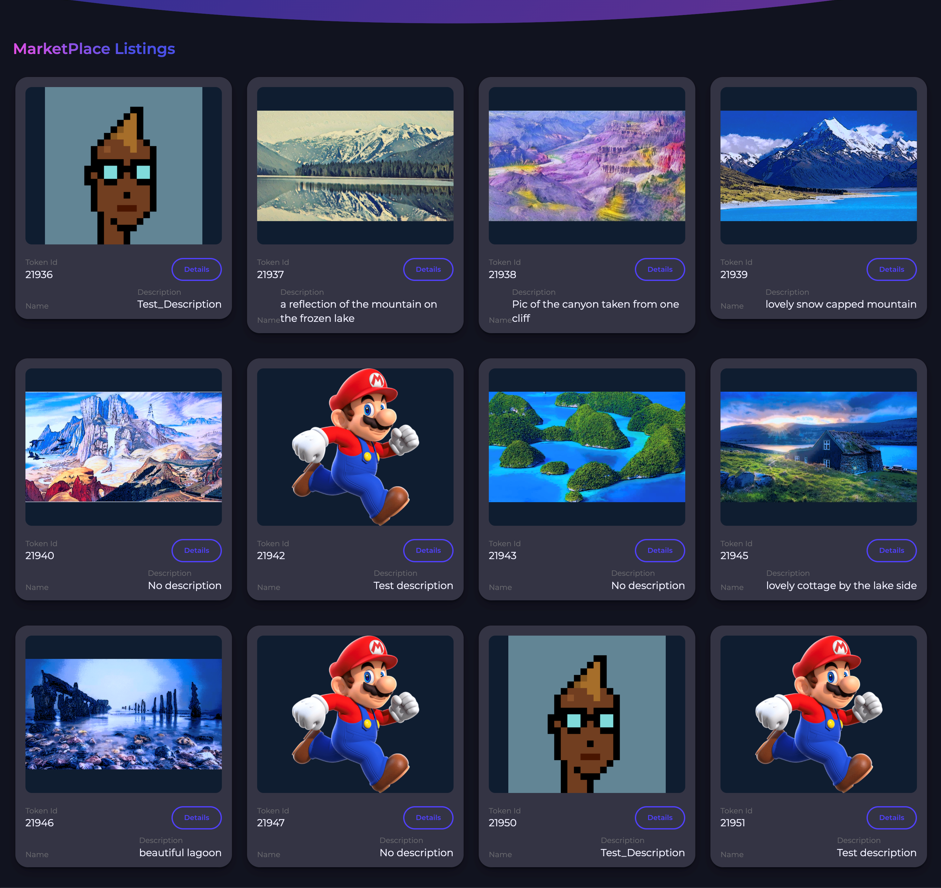 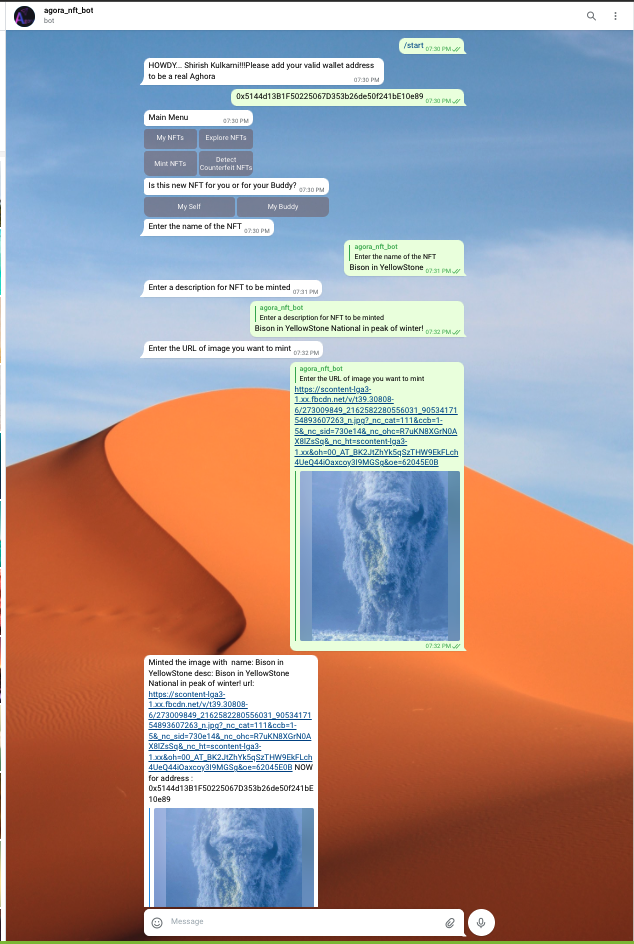 Web3 applications, though hyped within smaller circles, fall short of greater world adoption like web2 apps due to the unfamiliar & often cumbersome onboarding processes. "Agora - NFT Automation using Bot" is a project where we have tried to express our take on how web3 applications, specifically in the NFT space, should be built to enable mass adoption by the web2 users. Agora is an NFT marketplace with bot automation of all NFT management operations. The main feature of this project is the automation of NFT minting, exploration & wallet profile management using the bot infrastructure. We have currently implemented all features of the Agora Web Platform into the Agora Telegram bot which makes it very simple for new users to experience and explore the Web3 NFT world. We intend to extend the bot infrastructure to support discord and messenger in the coming weeks. It also features a modern smart contract based “Sequence wallet” with a no seed-phrase implementation which provides an easy Sign-up experience for the new web3 users. To ensure the novice users are protected from fraud, we have enabled a find counterfeit NFTs feature to check similar NFTs with the similarity percentages.

This project uses technologies which makes it easy for web2 users easily access web3 NFT space. The project has mainly 2 components, the Agora-web, which is a web based NFT marketplace with seed-phrase less Sequence wallet & the Agora-bot, which is a bot which can perform all NFT management operations similar to the Agora-web channel using the user-friendly telegram user interface. To achieve this omni channel user experience, we have build the core APIs using NodeJS and both web and bot channels call this for blockchain based data. The Agora-web frontend is built using NextJS, React & Express. The Bot is implemented as a Java application using the Telegram SDK. The customer authentication is done by integrating with "Sequence wallet" in the Agora-web for easy authentication as well as onboarding of even a novice Web3 user. All the components, namely, NextJS, NodeJS API backend and Java bot application are deployed in Google Kubernetes Engine (GKE) in a cluster with 3 nodes for high availability.