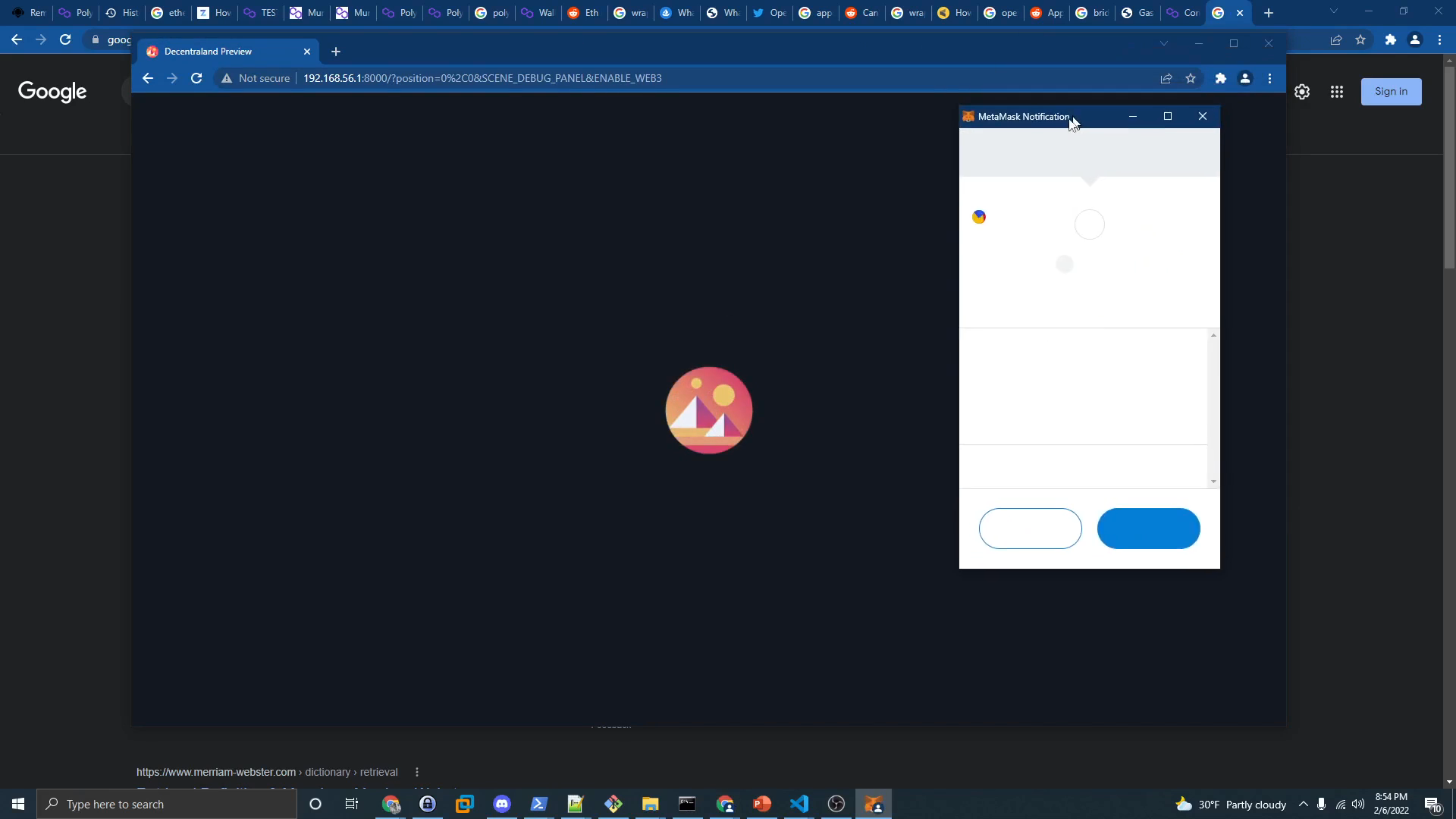 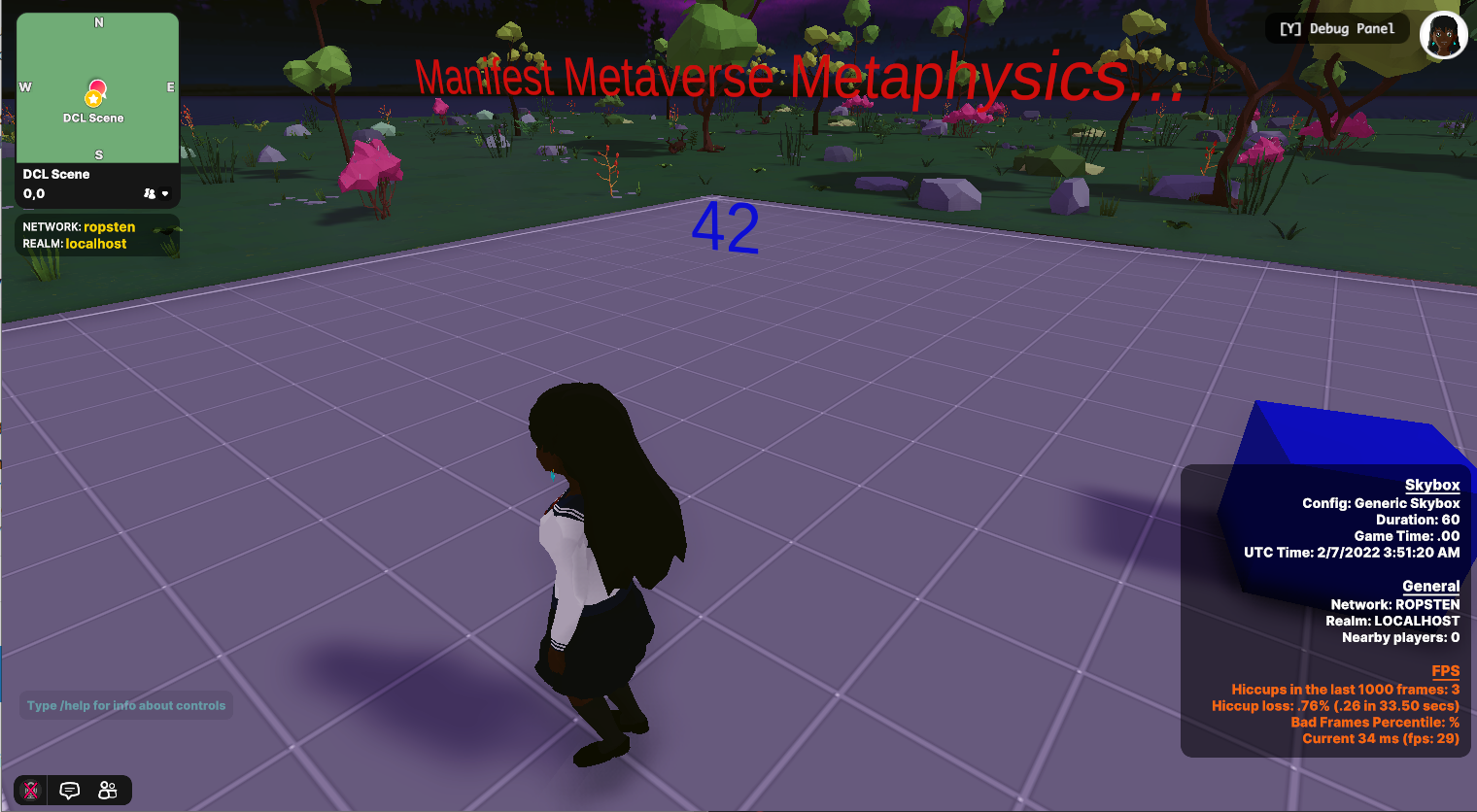 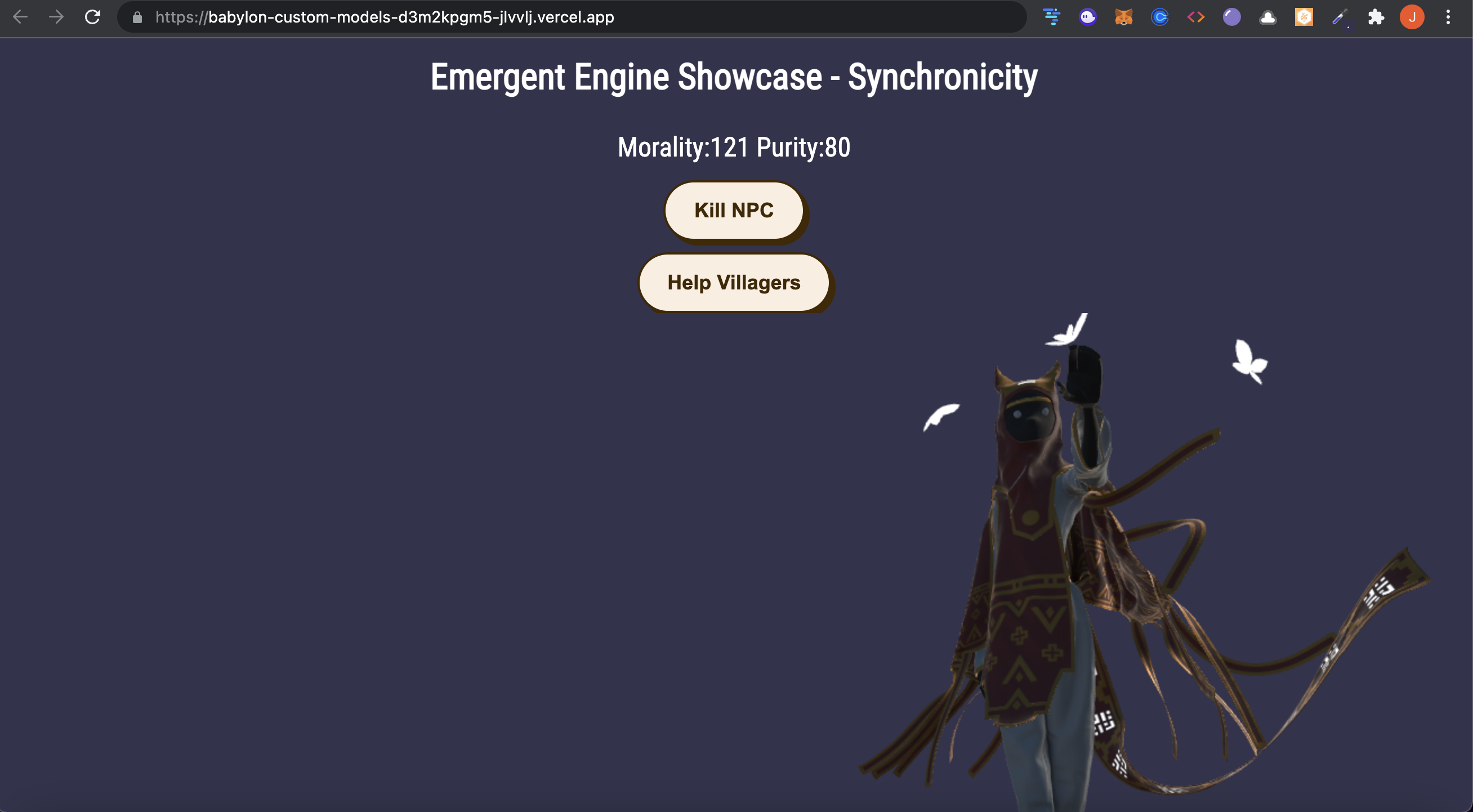 Emergent Engine- Synchronicity leverages the speed of Polygon PoS to enable near-real time gaming mechanics and meaningful metaverse-mediated interactions. Using this engine, users can create prototype multi-party games that reflect on-chain smart contract state that is interpreted and rendered every few seconds in near-real time. Our engine uses a contract-to-metavere state mapping, which unleash endless possibilities, including 3D objects and animations, 2D images, text, URLs, NFT model(2D or 3D), audio and music, and myriad other multimedia. The engine, through its state retrieval and mutation functions, is able to implement the commit-reveal pattern to support hidden information state for multi-party interactions using on-chain state and state validation logic. Architecting state transition logic in this way enables transparent, provable, fairness and prevents cheating by malicious parties able to reverse engineer client-side code to inspect “hidden” state. A prototype blockchain scene in Decentraland demonstrates the use of Emergent Engine- Synchronicity, “metablock” to concretely showcase on-chain state mapping to render changes in the user interface over time and the capability for players to manipulate the on-chain state tracked by the metaverse engine. In addition to this proof-of-concept 3D scene in the Decentraland metaverse, the team planned and created the user interface to support a player state change-centric metagame. In this metagame, we have a list of characters and land attributes - these are on-chain NFT features. Specific feature ranges drive NFT value automatically. Some features in certain levels-ranges-combinations are rare and attached to high values (rarity bonus). Furthermore, the price of NFT is not determined a-priori by team but on a continuous basis according to a set of rules: number of likes, number of claps, visits, interactions, etc. All drive changes in the total “score” of the NFT .Some of these rules can be announced, such as if your NFT gets claps, its value raises. While other rules can be “hidden” to the player voluntarily, for example, if you kill an NPC, your “killer metric” score increases, if you do quests for people, your “likability metric” score increases etc. The combination of these attributes will have consequences. Aside from “metrics”, the character is also attached to “records” – an on chain array or timeline of the events since the start of playing, which are all on-chain and aggregated (e. g. using state machine-based logic) to decide how a player should be treated, what NPCs should say to player, etc. Events in game can be marked as positive or negative by the game designer. And they can be attached to reactions of a character. Character Alignment. These are alignments that are part of your character, and are global for all NPCs. Some of these can affect your appearance. Another visually-mediated feature is a mechanism called "extreme morphing", which has the Hero show their 'true character', going as far as to have the Hero sprouting a pair of wings. The color and shape of the wings are based on the Hero's alignment – from white and pristine (good), black and ragged (evil), or even eagle-like white wings (neutral) and the size of the wings depending on the amount of followers the player has from small wings (few followers) to large wings (many followers). If the player begins to morally explore the utmost extremes of programmable behavioral dimensions, then they begin obtaining special visual effects. The extreme morphing can also be used as part of an interaction with an NPC. Outside of an extreme morph, the Hero's appearance still changes, but on a lesser scale. Depending on their morality and purity, their facial features will look different. A number of visually-mediated dimensions are possible to impart a combinatorial explosion of state possibilities to serve as inputs for programmable state machine logic. Examples of these dimensions include "good vs. evil", "sanctity" vs "corruption", "amiable" vs "hostile", etc.

The Emergent Engine - Synchronicity EVM-compatible smart contract tracks and mutates on-chain state to transparently and securely feed into metaverse in-game logic. It employs the OpenZeppelin 4.X API standard to enable richer collection data structure state on chain, such as sets and feature-rich maps. The retrieval and storage of on-chain state allows metaverse games to store hashes of metaverse-derived client-side state to enable hidden information games using the commit-reveal pattern. On-chain verification of commitments once revealed is a logical extension of what we currently were able to build in the allotted time. Furthermore, we built two frontend clients to demonstrate for the the metaverse engine backend. 1. A direct connection to the Metaverse Decentraland - were we show "read" capabilities in real-time from the Polygon PoS chain. We leveraged the Decentral SDK and the eth-connect library to read remote smart contract state from the Polygon PoS chain and render it in real time to a Decnentraland using a custom render DCL "System" class instance as part of the scene. 2. A 3D base game application - rendering the Character from Journey in 3D. The application is built upon the game engine BabylonJS and VueJS. It imports a custom glp asset with textures and meshes that can be updated according to a Morality score, in order to reflect Low or High morality on the character appearence in real time. The Morality score is impacted by in-game actions : "Kill NPC" and "Help Villagers" represented currently by action buttons ( but to be linked with live action down the road). The score is to be registered on the contract in near real time. And the character appearence ( and underalying NFT value) can be updated continuously in near real-time from the contract record "Morality".