Create proposals to read books with friends or strangers and then earn badges or win money for participating! 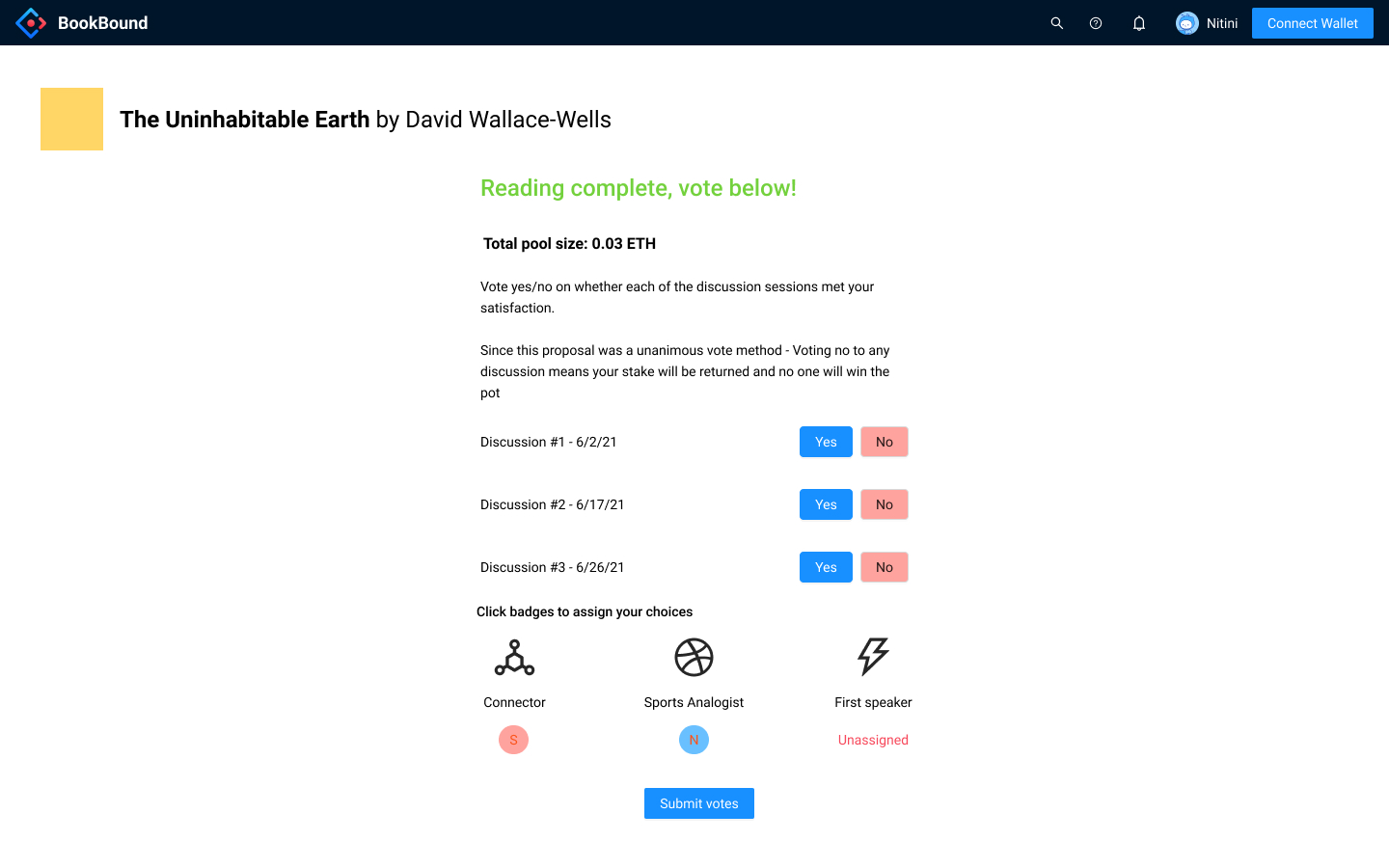 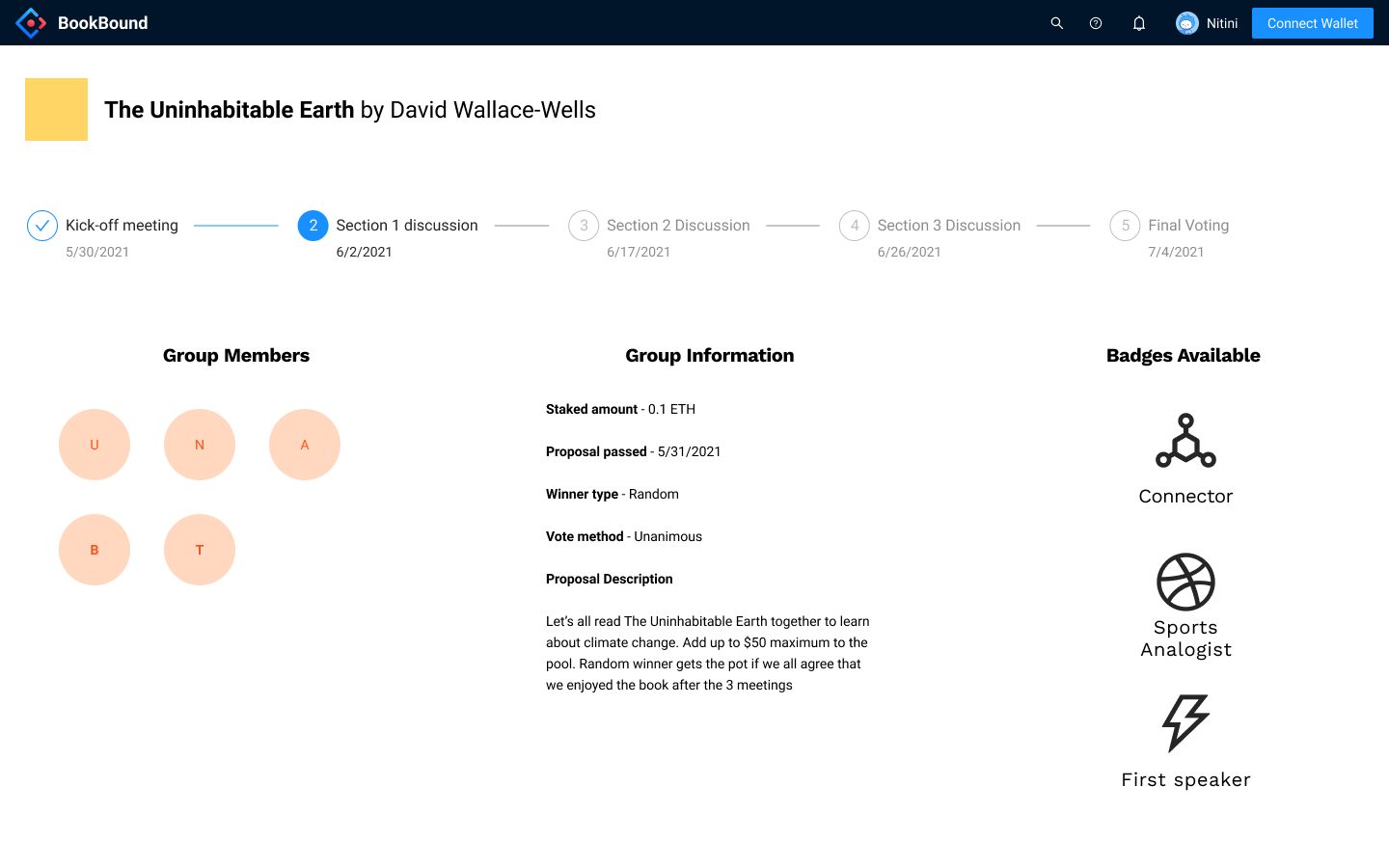 BookBound is about a new way to incentivize groups of friends or strangers to read books together. Users are able to stake eth on books that they'd like to read with a group. Other's can also stake the minimum account and when the group size is hit, the book proposal passes. Once the proposal passes, the members organize offline to go through the book according to the timeline in the proposal. The creator of the proposal is assumed to take on the responsibility for setting things up. After the deadline for reading the book has passed. Everyone votes on whether they had a good time reading / discussing the book. If everyone agrees, then one random person in the group is rewarded the whole stake. The purpose of staking and randomly assigning the pot is to ensure some accountability amongst the group. If someone votes that they didn't enjoy the discussion, then everyone gets their stake back. If someone doesn't vote at all, then at the terminal deadline, everyone still gets back their stake. 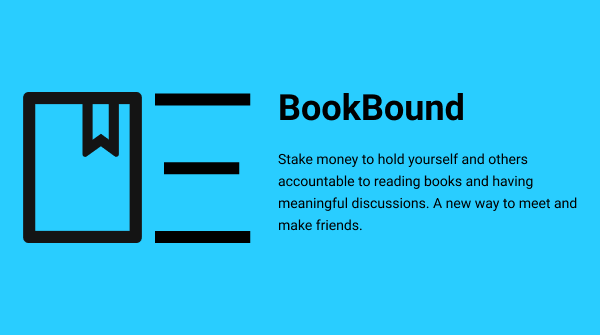 Link to Figma: https://www.figma.com/file/OMHAvN9B91uIee3tzKLtcd/BookBound-Web3-Mocks?node-id=0%3A1 Overall this project ended up being more of a learning experience for me. So I'll cover the tools I learned as well as which sponsor prize I would have aimed for. Figma - Built six different mocks for how BookBound would work. Leveraged the Open Source Ant Design library for components. Created wireframes for the following pages: Choose a book, View an active proposal, Create a proposal, Vote on a finished book, Join a Proposal, Profile page Scaffold-Eth - I did the Decentralized Staking App Challenge that's a part of scaffold-eth and got that working. The app has the barebones of what would be needed to really make BookBound. The core of it is everyone staking some Eth. What remains to be built is the voting on whether the stake should be distributed. POAP - The badges that are a part of BookBound would leverage POAP. For each book the creator can choose specific badges that are to be awarded. These would be NFTs that are unique to that group and what the badge is about. An example of a badge would be "Thoughtful Listener" awarded to whoever was the best listener in a discussion on a book. Ethereum - The whole thing will be built on ethereum because it provides an easy way to get going with payments (assuming you have some crypto). The other use case is that Ethereum is one-way, it's not easy to give back eth once it's staked or given to the winner. Hopefully this makes people more accountable when they stake their eth in a book proposal as they won't get it back until the final deadline of the proposal if it passes.